When most people think of Versatile, they think of really big tractors, so many would be surprised to learn that it wasn’t until 1972 that the company introduced a tractor with more than 200 horsepower. That tractor was the model 700, which produced 220 horsepower from its Cummins 555 cubic inch engine.

The Cummins 555 is a V8 type engine, which provided peak power at a fairly rapid 2,850 RPM. Dual intake and exhaust valves allowed the engine to breathe easier which, when coupled with its over-square design (larger bore than stroke), provided for larger valves and even more breathing ability. This was said to produce more power at higher speeds. But in case you think that the engine was going to fly apart with all this speed, it was also said that the shorter stroke actually allowed for slower piston speeds.

The Cummins engine on the 700 was coupled to a Dana- Spicer two plate ceramic button clutch, which then sent the power on to a transmission of Versatile’s own design. It was a 12 speed constant mesh type of four shaft vertical design. Speeds ranged from 2.6 to 14.5 miles per hour with four reverse gears offering speeds from 3.3 to 5.3 miles per hour. Axles were also of Versatile design featuring Eaton differentials.

Most of the 700’s hydraulic and steering components were “off the shelf” parts. The 24 GPM hydraulic pump was built by Cessna. Green spool valves controlled flow to Pioneer couplers. A Ross steering valve pointed the big tractor in the right direction. 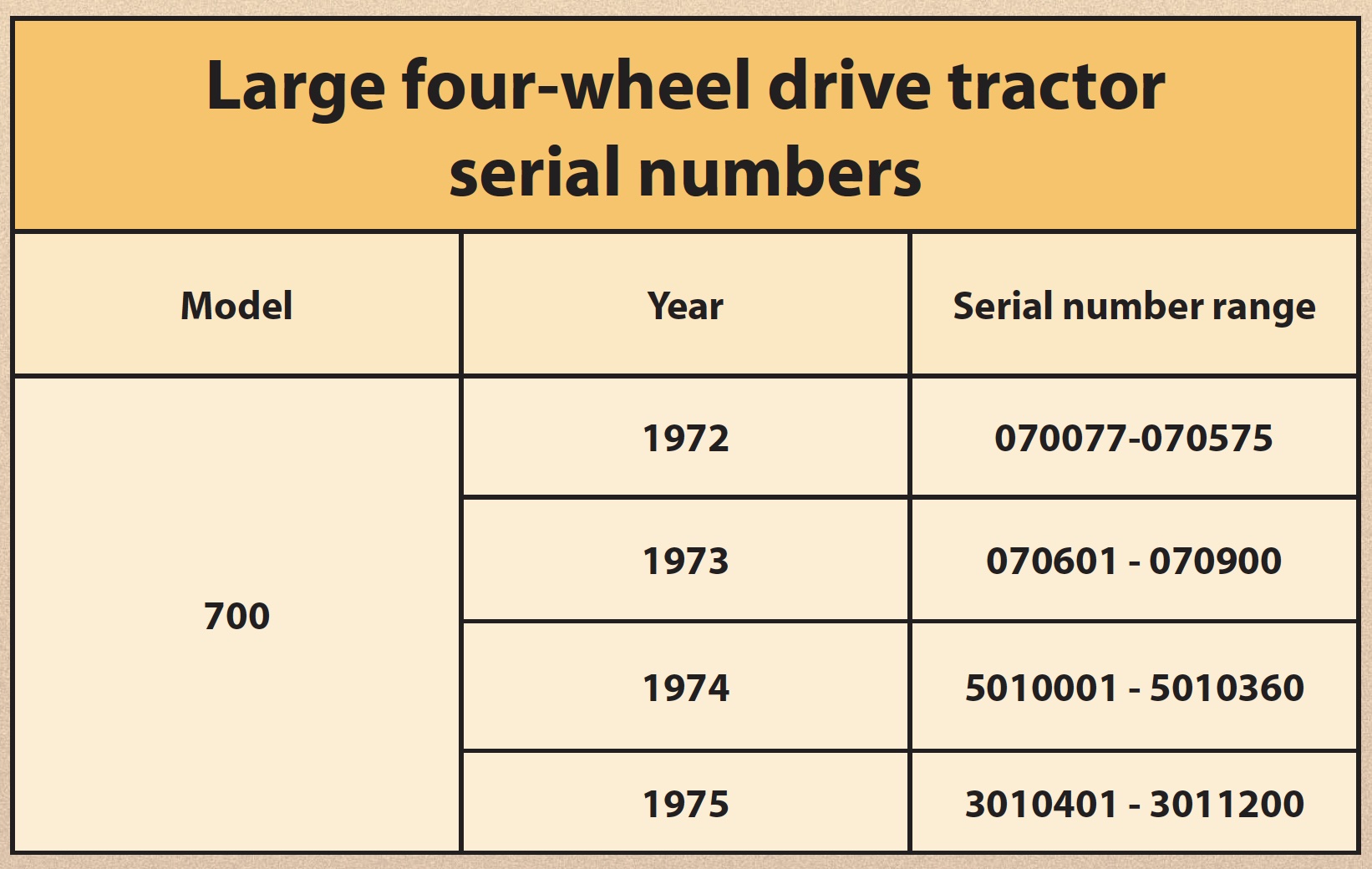 The 700 came in at just under 21 feet long and 11 feet high. Depending on wheel equipment, the tractor weighed in at about nine tons. Fuel capacity was 170 gallons.

Operator cabs were the hot feature on tractors in the early 1970s and Versatile engineers paid special attention to the operator’s station on the 700. Made of heavy gauge steel, the cab assured the driver of maximum protection. It was also heavily insulated to control sound levels and rubber mounted. To further enhance comfort, special care was taken to make sure the cab was sealed tightly against both sound and dust. A heater and air conditioner were optional equipment.

When first introduced, the 700 was technologically the equal of anything on the market. However, it wasn’t long before Deere introduced its new 30 series four wheel drives. Steiger, International Harvester and others were also moving ahead and by 1976, Versatile was forced to discontinue with the original 700 and replace it with the 700 series II.