Yep, just about done. Only a few scoops left. You’ve been out here shoveling for hours to clear the driveway. You stand up and stretch—it feels like your back will never straighten again. Off in the distance, there’s a bit of a rumble. The rumble gets louder and is accompanied by the roar of a diesel truck and before you can say, “Oh, no,” the snowplow comes sailing by in a flurry of powder snow and leaves a snow windrow two feet high across your driveway. I hear similar stories quite often. Now, I use a skid steer loader. But even with that, I wish I had a dollar for every time I’ve been plowed shut again! One never knows what time the plow will come through but it almost seems that the driver is sitting and waiting until you’re almost done and then…!

All kidding aside, a snowplow can be a very welcome sight after a snow of any amount—even more so this year with the snows we’ve had in Minnesota. And at this writing, the forecast says we could have another foot in the coming week! By the time you are reading this, winter should finally be over. This year’s struggles, however, brought up thoughts of other hard winters and the equipment used to deal with all the snow. 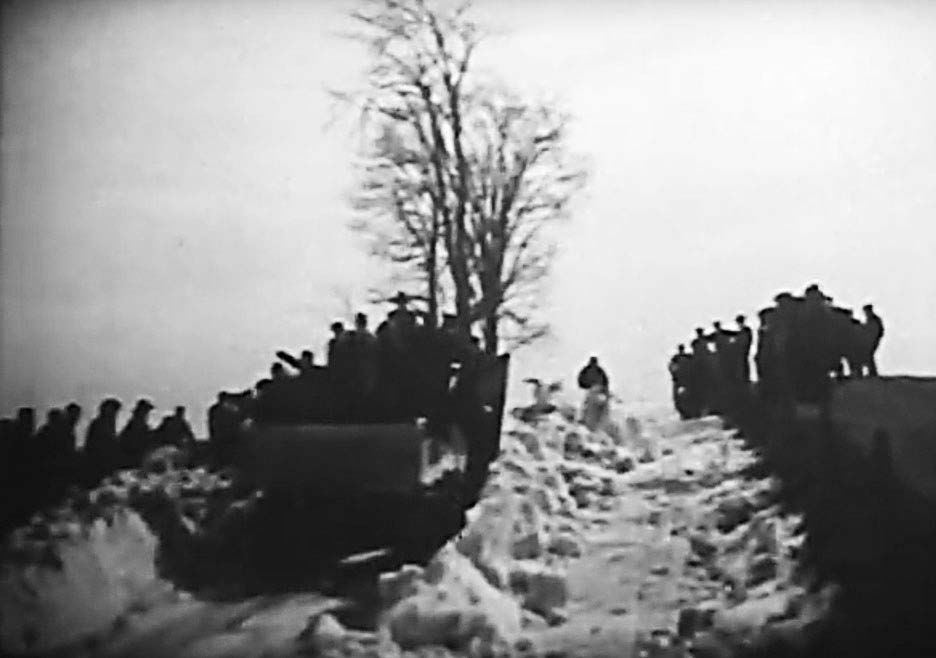 My father used to talk about the weather in the ’30s, especially 1936, and all the snow and cold weather that year. He told of a blizzard that year when the township plow came through, followed by a crew of men walking along behind and carrying shovels. The truck with a V-plow would get a run at the snow that was drifted deep across the road, the snow would fly, then the truck would back up and hammer the drift again and again as he cleared the road. The crew was along to break up the snow’s top crust when it was so thick or so hard that it prevented even the V-plow from doing its job and also to dig out the truck when it hit a little too hard and got hung up on the snow! This picture is from 1935 in Oneida County, New York. The truck was a 1935 Walter. I can’t help but wonder about the challenges of staying on the road when all you see are the two curved-up sides to the V-plow and the narrow space between.

This year was probably much like 1936 and other years of heavy snow. It seems that, in those heavy snow years, you might see trucks and equipment that are rarely out—used only in the worst seasons. 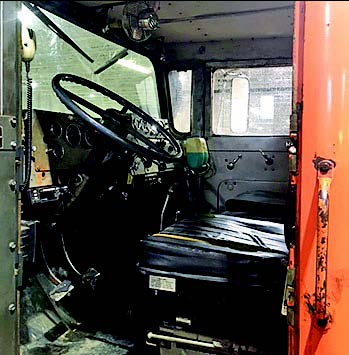 One such sighting might be the old Oshkosh or FWDs that many state and county road crews still have. Minnesota’s Department of Transportation (DOT) faced some real challenges in some areas of the southern part of the state. Heavy snows moved in fast, pushed by relentless winds and ice on the roadways from an earlier rain was already a problem. The result was vehicles being stuck and abandoned as their owners sought shelter in nearby towns. When the storm was over, Minnesota’s DOT was faced with reopening I-35 and other roads in spite of the fact that those roads were peppered with vehicles sitting every which way in the lanes and on the shoulders. Many were visible, but some were buried so deep, there was no trace. They became just another snow drift! So when the huge truck mounted snow blowers come out, it’s not at all uncommon for an operator to hear a different noise and see pieces of plastic and steel coming out the blower chute as they “discover” someone’s automobile! One of the big blowers is the oldest they have and is being retired this year from state service. It’s a 1968 model, nicknamed “Herman Munster”! 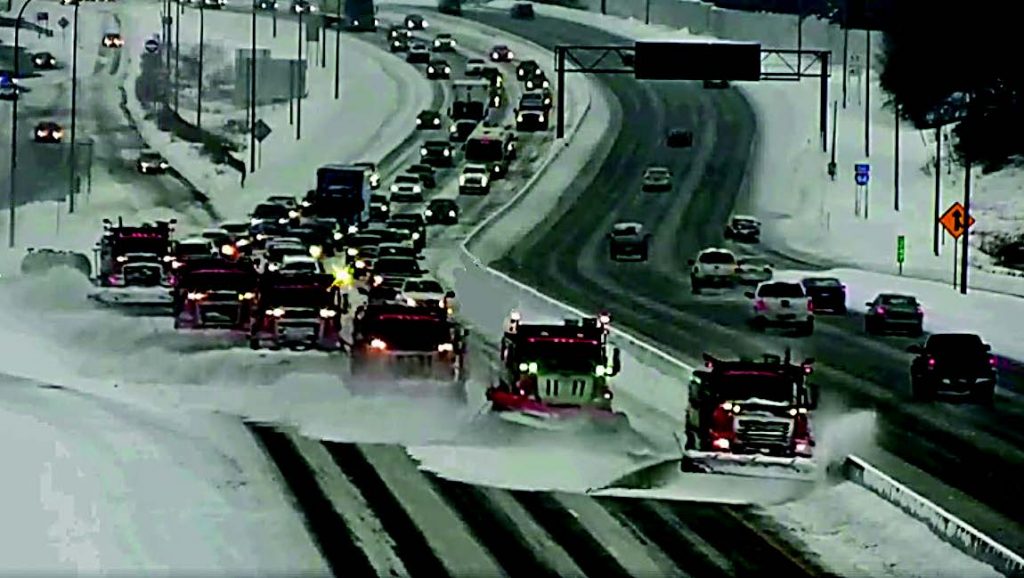 In this age of interstate highways and limited access freeways, highway departments have adapted in quite impressive ways. Gang plowing is a practice that has become quite popular in DOT circles. I saw it for the first time several years ago on I-494 in Bloomington, Minnesota. The roadway was three and four lanes wide with turn lanes. Spread over those lanes were seven different plow trucks. The first cleared the inner shoulder and part of the first lane, the second came right behind and picked up the windrow from the first along with that of the lane he was in and so on down to the seventh truck, who pushed it off to the right shoulder. No fuss, no muss—the highway was clear! 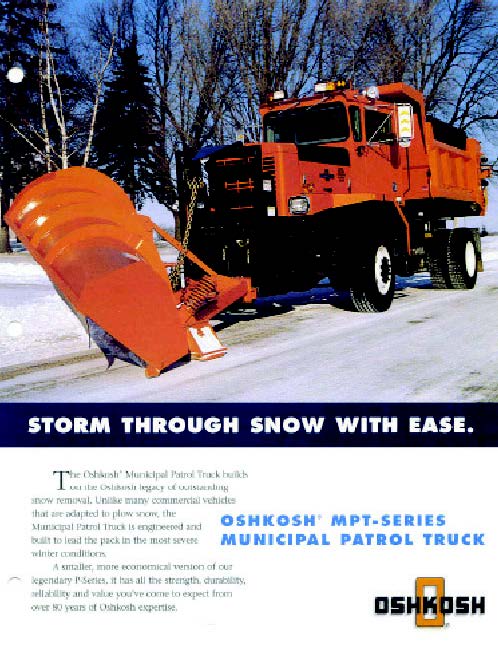 By contrast, I recall going through northern Alabama in the early ‘90s. They had just had several inches of snow and, with limited equipment and unexperienced drivers, it was quite a mess. Some lanes were plowed, some were not. I remember driving in an inside lane of I-65 for miles only to have the plowed road end and a snow windrow cut at an angle across the lane. It must have been time for the grader operator to call it a day, I surmised! Gang plowing is good to see! 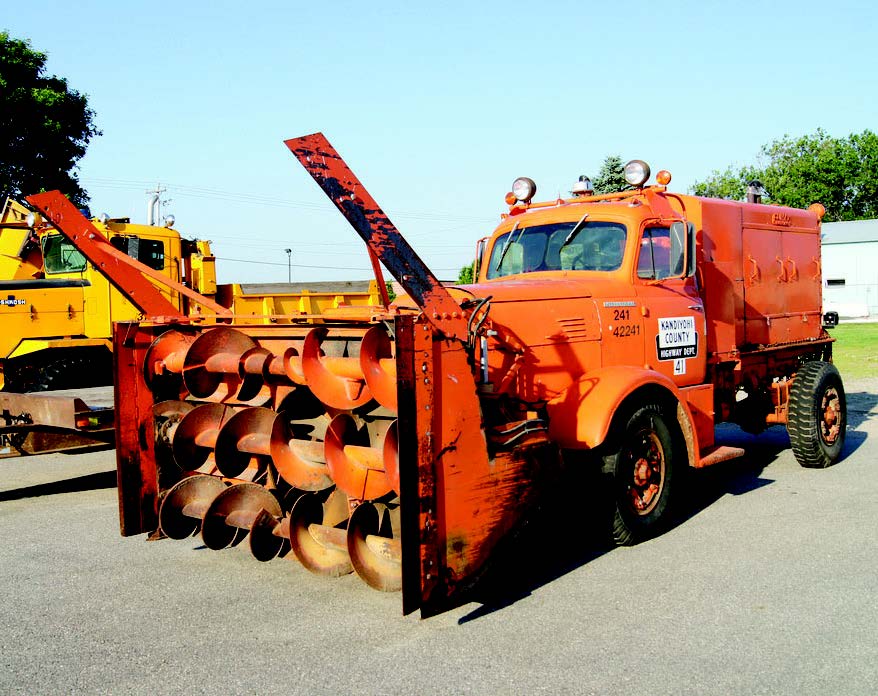 Minnesota is also one of a growing number of states that now use a tow plow. To simplify things, the tow plow is a trailer with a plow on it. The snow plow driver can adjust that trailer to run off at an angle behind his truck, increasing the total width of highway he is covering. I watch them on occasion and it rather amazes me how they stay put and don’t drag the truck to the side with them. It’s all a matter of weights and balances, I guess!

A good neighbor of mine, Joe, shared some of his snow plow experiences as a county employee for 26 years. Joe said that when he started with the county in 1962, they had seven of the big plows, some Oshkosh and some Walter. He said a common problem on the Walters seemed to be a jackshaft. It made sense because I remember seeing an old Walter almost 50 years ago with chain-drive. Joe also said that there were a few things in common with all the old, heavy duty plow trucks. Below, I’ve elaborated on those things.

They were all hard to drive. There was no power steering and it was not rack and pinion. The driver would fight to turn the truck, particularly with a heavy V-plow hanging on the front and a box full of sand. With older style steering, trucks always had play in the steering. It wasn’t uncommon to have an eighth-of-a-turn of play in the steering wheel. Shifting was done with a main box and auxiliary transmission—two sticks, very tough to even learn when you are occupied with so much else! 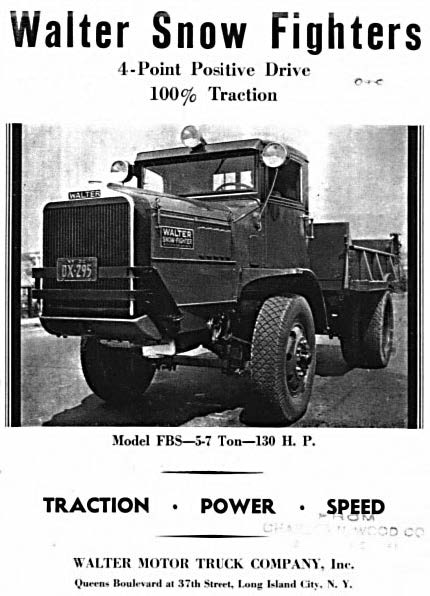 They were all underpowered. You see these big iron horses and think they could pull a mountain over. In reality, they struggled just to open roads at slow speeds! Most had a gasoline-powered flat-head six cylinder.

They were very cold. I can only assume that what heat there was went first to keep the windows clear. They were extremely rough riding.

In those days, and as long as they continued being used, operating the truck was a two-man job. While one had all he could do to drive, his “wing-man” did much of the plow and/or wing operation. A wing-man with poor timing could send a truck spinning off into the ditch.

A neighboring county had a 1942 FWD that they purchased in 1950. It then had a wooden cab and was used like that for a few years until that was replaced with an International cab! Regarding its use and operation, one man said, “They don’t make them like this any more, thank goodness!” Another, “It was a man killer” and “drivers had to wear sheep-skin pants to stay warm”!

Neighbor Joe spoke of the county getting a new truck in 1983 and how much that changed his job for the better. It was a GMC Brigadier with a Detroit Diesel, 13-speed Road Ranger and a tandem axle. He was quite amazed when one day he found himself going well over 60 miles per hour! 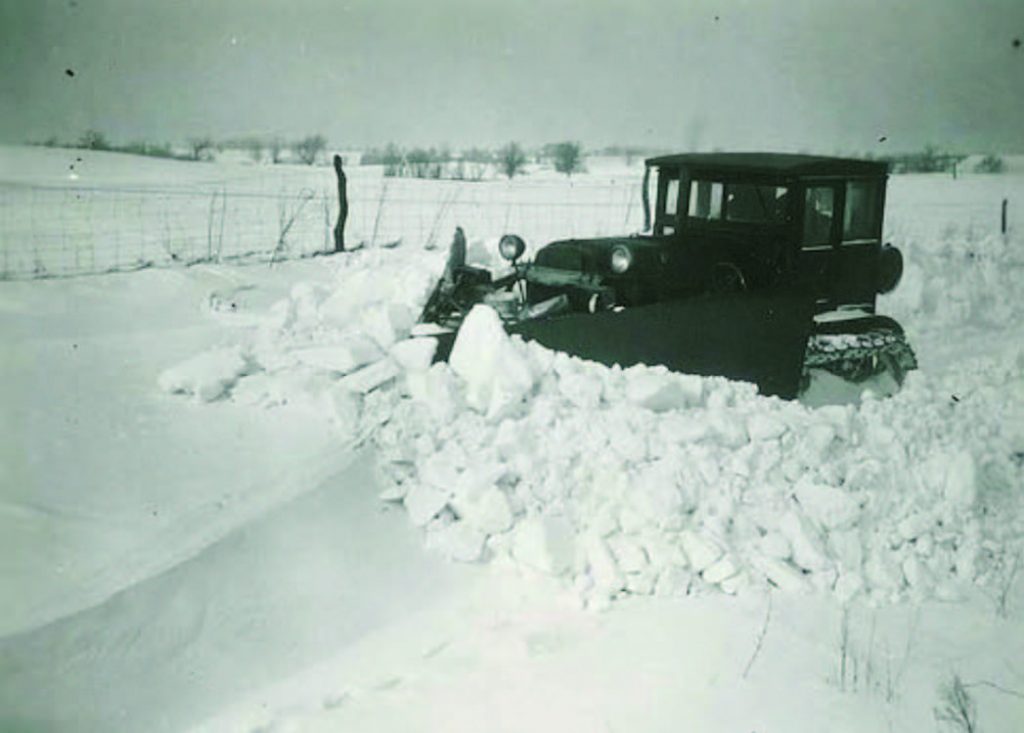 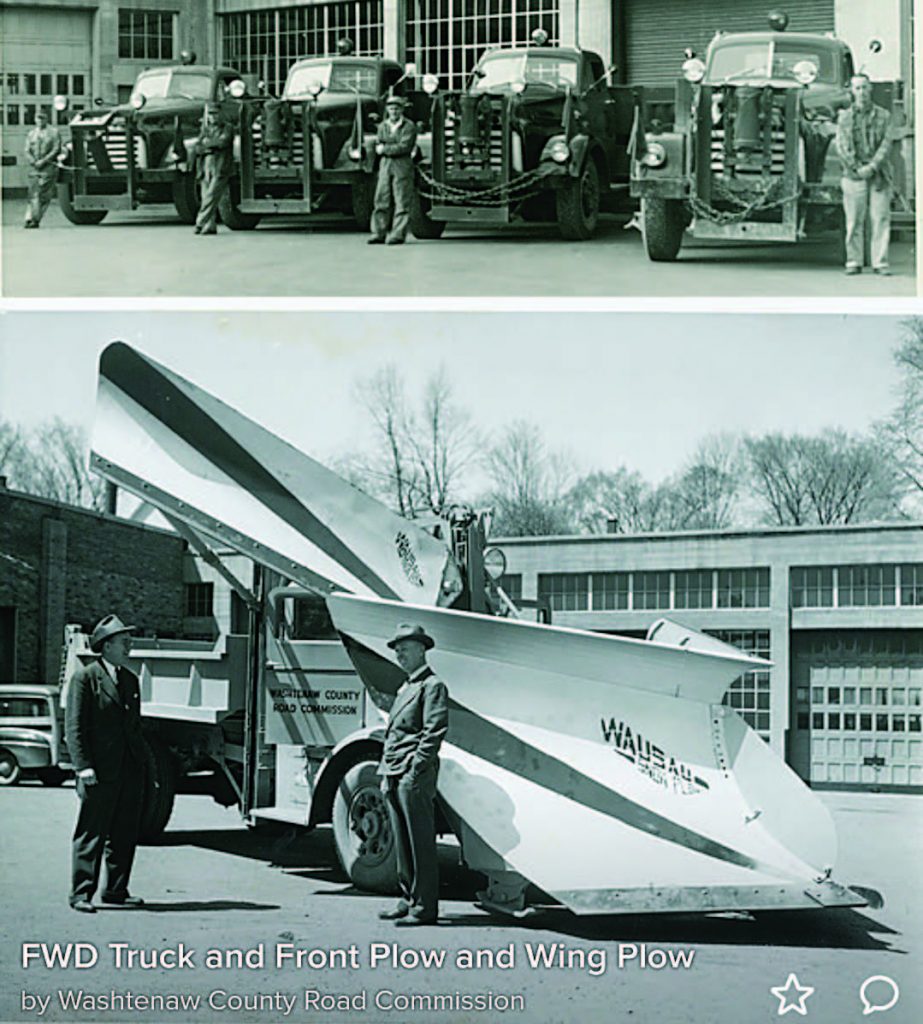 I’ve often thought of earlier days when a team of horses and a bobsled was your way of travel. For many decades in our country, snow was there for the duration of the winter. Even though trails were packed with repeated use, just how much deep snow could a team go through? But, I guess those were days before we would run to town for a gallon of milk!

I don’t know if it’s the case in every state, but I ‘ve always wondered why snow is plowed into the wind and often towards a prevailing wind. All too often, you will see a plow on an east-west highway with the snow coming off his plow and into a northwest wind. I realize that is the way the equipment operates in what’s probably the fastest, most efficient manner, but the inventive side of me says there must be a better way! I followed a state plow across I-90 in southeastern Minnesota this winter. It was after a storm and the wind had switched to the northwest. Cars and trucks were lined up for most of a mile behind this plow, but he was going east and the powder was so thick, he couldn’t see the cars behind him, no one could see to pass him and it only made one wonder how much of the snow his plow had picked up had actually blown in right behind him on the road?

It takes a good bit of talent and experience to just stay on the road when the road is so blown over. No shoulders, no reflectors, blowing snow and no previous tracks to follow. How much is guessing? I often wonder how these snow plow operators even know where the road is. How often might a driver shudder if he saw just where he was on the road? They have to deal with poor visibility, drive the truck, manage a plow, a wing, a belly blade and a dump box with a sander, all while looking out for the person who pulls out in front of them or tries to pass! I really give them credit!

My special thanks to Tom LaBotz from Grand Rapids, Michigan for his help with some pictures.