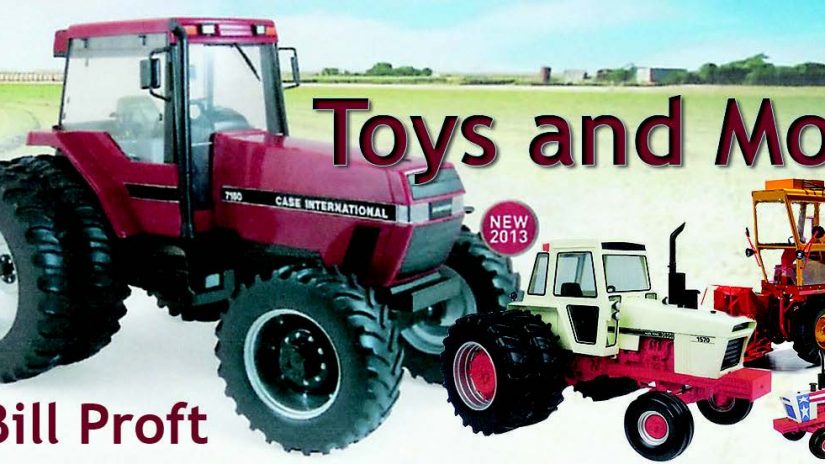 My farm toy collecting interests have changed over time and I’m sure that’s true for most people in this hobby. I started receiving farm toys when I was quite young, probably three or four years old. As it turns out, I didn’t necessarily focus on one brand. Instead, my brother and I had a mixture of tractors and implements. We had John Deere, International Harvester and Allis-Chalmers tractors, as well as John Deere, New Holland and Tru-Scale implements. Each toy we had was a stand alone purchase or gift. We never received a “set” of farm toys, most likely because of the price. Ertl and other toy companies certainly offered sets, which usually consisted of a tractor and one or more implements. Some even had unique pieces that were only offered in the set. However, the cost was considerably more than that of a single piece. So, I have never owned a farm toy set, but certainly would like to.

Having attended quite a few farm toy shows, I have seen a number of different farm toy sets. Some are relatively rare and expensive, others not so much. They cover most brands and scales and the toy companies have produced them to this day. I thought it would be interesting to share some of the sets I have found for sale at shows over the last few years. So, let’s take a look.

Photos 1 and 2 show a two piece John Deere tractor and flare box wagon set with the original carton. I am not sure if the clear bubble wrap is original or not, but it certainly looks nice. Note that the fold-out toy catalog is included in the wagon. The graphics are simple, but look great in my opinion. I especially like the four-legged leaping deer trademark on the front and rear. The box and the toys appear to be in mint condition, and while this is a very simple set, it would look great on a collector’s shelf.

Hubley was a toy manufacturer based out of Lancaster, Pennsylvania. They made a number of farm toys, many of which were Ford. They also had some generic tractors simply branded “Hubley.” Photo 3 is of a Ford farm set from the late 1950s or early 1960s. Note that the box is in very good condition and that the cardboard insert is included. The insert is the piece inside the main carton which has the holes and punched-out tabs used to secure the toys in the box. In some cases, you will find a set of the toys with the outer carton but no insert. Finding nice boxes is tough, but finding nice boxes with nice inserts is even tougher.

Note the graphics on the carton. The carton is intended to be separated and folded up to form a small storage shed. So, you not only have the toys, but also a small building in which to store them. This feature is a big reason why so few cartons have survived over time. Not only did kids have a propensity to simply throw out the boxes, but keeping one intact that was used as a shed is very difficult.

In this specific set, there are three pieces of equipment: A tractor, plow and a trailer. The trailer includes two yellow crates with tiny ducks. While that wouldn’t be my first choice for a farm toy if I were designing it, you have to agree that it is unusual and quite interesting. This is another great example of a near mint farm toy set.

The next two pictures (Photos 4 and 5) show what I believe to be a Carter Tru-Scale International Scout. While this is not specifically a “farm” toy set, it certainly could have been used in a farm setting. After all, the real machine was marketed as being somewhat “universal” and adaptable to many different tasks. In this case, the exterior carton is in good condition, but the insert is missing. Note that the Scout and accessories are loose in the bottom of the carton.

This is a really neat toy in that it can be turned into a pickup truck or “station wagon” by simply changing the roof tops. There is also a plow blade that can be added to the front for moving dirt, snow or sand. If you want the ultimate off-road vehicle, the tops and doors can be removed and the windshield lowered. While the overall condition of the toy is not excellent, it is still a very nice example.

Since Ertl has been a huge player in the farm toy market, they have produced many farm toy sets over the years. One example is the International Harvester set shown in Photo 6. Note the graphics around the periphery of the top edge of the carton. This is identified as a “Deluxe Farm Set” and the carton is designed to be turned into a machine shed. The clear bubble packaging is in place through which you can see the 806 tractor, the gray muffler, four-bottom plow, disc and barge wagon. This set was from the mid-1960s and is in terrific condition.

Photo 7 shows three complete farm sets from the 1970s. In each case, the carton can be cut and folded to make a barn. On the end panels, you can see some of the doors and windows. Note the similarities in the graphics on all three despite the different brands of equipment. In the upper left corner of each carton, there is a white background area with the brand name printed inside, making it appear as though the same design was used in each case. There are subtle differences between them, but they are very similar.

The set on top is for Case. It includes the tractor, flare box wagon, disc and plow. On the lower left is the International Harvester set. It has a barge wagon with the disc and a very different plow, which definitely looks like the real International Harvester plows from the time. The Massey Ferguson set is on the lower right. A manure spreader is included with the flare box wagon, disc and plow to make an even larger set. Back in the day, if you preferred Massey Ferguson equipment over the other brands, you received an additional piece of equipment. I have no idea how that affected the price of this set versus the other two, but it was a definite bonus.

At first glance, the Allis-Chalmers farm set in Photo 8 might appear to be in an unmarked box. However, that is not the case. The box would have been similar to those in Photo 7, but it is terribly faded from sunlight. In this case, there is a One-Ninety tractor with barge wagon, disc and plow. Yes, the carton can be turned into a barn as well.

Photo 9 shows an earlier Massey Ferguson farm set than that in Photo 7. This one includes the 175 diesel tractor and four implements. As you can see, the toys are in beautiful shape and the insert is included. Note that the box indicates that it can be made into a machine shed rather than a barn. Interestingly enough, the plain cardboard box that surrounds the farm set box is the original shipping container from Ertl. Another example of this set, in a poorer condition, is shown in Photo 10. Note the exterior of the carton Photo 9 ,above Photo 10, below, where you can see the machine shed doors in the center and the red and white “steel” panels for the sides.

So, there is a quick overview of some of the farm toy sets that have been produced over the years. I have often looked past them at shows simply because of the asking prices. Expect to pay anywhere from a couple of hundred dollars to a few thousand dollars for these sets, depending on brand, age, and condition. They certainly are not for everyone, but if you like to find all of the new in the box toys, I think they have to be included on your checklist. Enjoy.