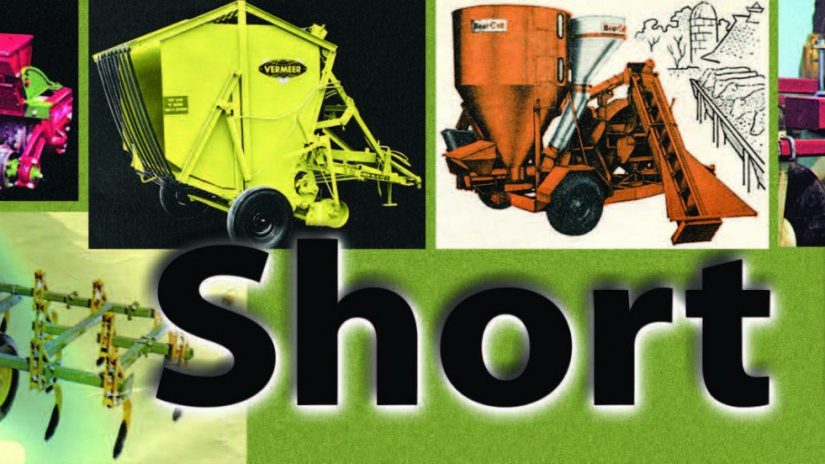 Okay, hope 2019 has started well for our readers. Down here in Texas, we are still wet from fall and early winter rains. It’s hard to believe we were in a drought last year from April to August, then ended with 20-plus inches of rain over our normal year. It was the second wettest year on record.

Let’s tackle the “déjà vu” thing, which seems to happen in all facets of life, but maybe more so out there in the ag world. Seems the same problems recur time and again. Here’s a sampling of equipment field demos.

SPCO, a company that I worked for, sold a lot of hay equipment. Late one spring, I received a call from our dealer in Gainesville, Texas about a Vicon disc mower recently purchased. So off I went from Dallas to Gainesville and inspected the mower at their customer’s ranch. The tarp was pretty beat up (torn) in the front. I noticed a wire cage (homemade) around the tractor ROPS and the hood was also dented up. Wow! Then the mower was a cutting dude, but the mower was tearing up his tractor and dangerous to his health. I asked, “Are you cutting in rocks?”

He said, “Yes,” and wanted to know how to get it to stop throwing rocks at him!

Without being too rude to him, I told him it wasn’t made to work in those conditions. (Duh.) I wonder if OSHA ever came out with rock throwing warning decals to place on mowers?

Years later, Vicon decided to go directed and we no longer represented them. So SPCO found hay line: Krone. It was also a good line and about a year after taking it on, the people at the factory in Germany wanted us to try out an experimental mower/conditioner. We agreed and a few weeks later received it from Europe. They sent a tech man to help set up and demonstrate the machine. We contacted some dealers, including San Antonio Implement, owned by Bill Coleman, who agreed to set up some hay fields for use.

After several days of mowing and having good luck, we went to a field of sudan hay. The owner instructed the tech guy that in the middle of the field was a six foot tall concrete post. Since the sudan was about seven feet tall, the only way you could notice the location of the concrete post was because in that area the hay was shorter, like a dip in the field. He showed him from the bed of a pickup and then the low spot was very apparent.

So off the tech went, mowing around and around, getting closer to the center of the field. The land owner noticed he was getting awfully close. Guess what? Bang! He hit the post—end of the mower day. It took a couple of weeks to get the parts from Europe. They sent a tech guy but it wasn’t the same one to make the repairs and get us going again. 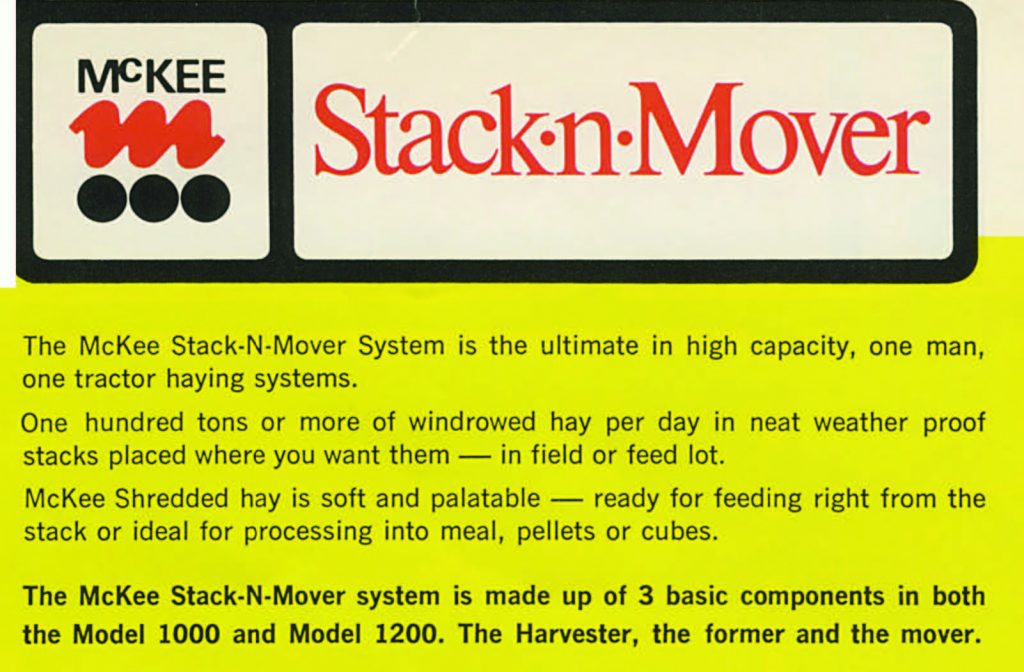 Another hay tool we sold was a McKee hay stacker built in Canada. Our salesman out in west Texas sold several and I was assigned to get him to set up a unit for demo. I’m going to interrupt this with another story about my trip out west. I flew for the first time out of
Love Field in Dallas to Hobbs, New Mexico. I was booked to fly on TTA, which was TransTexas Airways, also affectionately known as TreeTop Airways. It flew Dallas to Abilene
to Midland to Amarillo and then to Hobbs. I guess you can figure out the treetop designation!

I was pretty nervous and as the plane took off, I was holding (crushing) the armrest in my hand. There were maybe a total of 10 people on this Convair 540 turbo prop.

I sat on the right side, next to the window. As we took off, barely clear of the airport, the plane suddenly turned hard left. Out my window there was nothing by sky and looking to the left, nothing but the ground!

I thought it was the end, but of course it wasn’t as I am writing this article today. 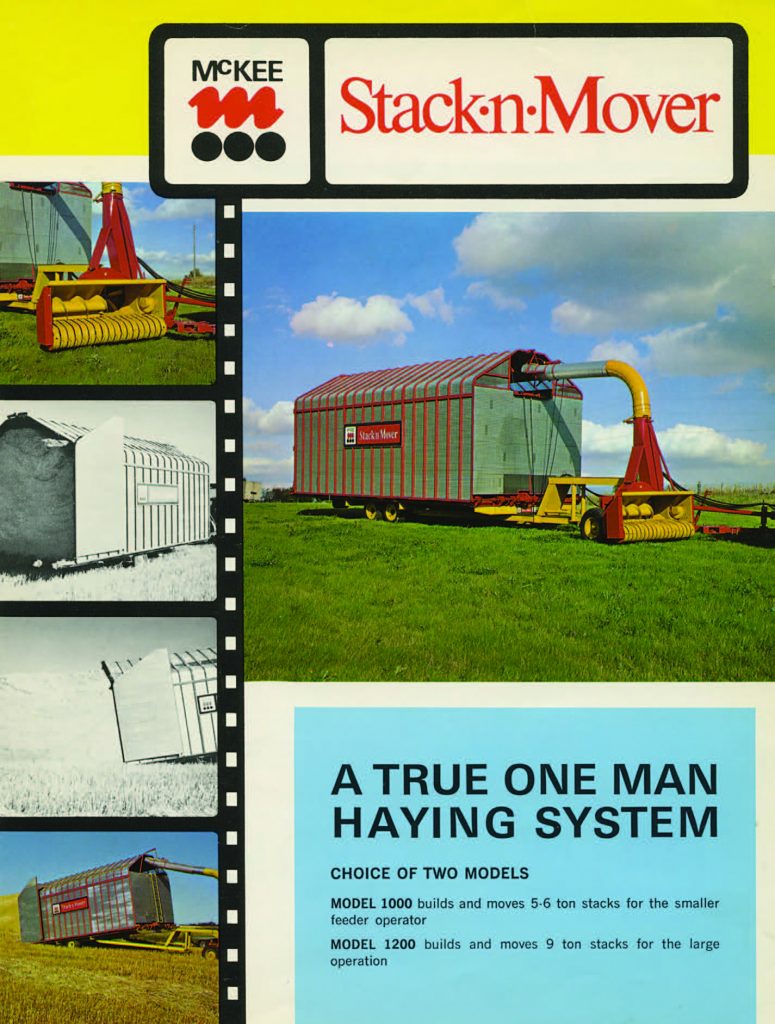 Back to the McKee stacker: After two days of setting up the barn on wheels, we were scheduled to go to the hay field the next day. The land owner instructed the dealer’s helper to be careful cutting in the alfalfa field because the south end was somewhat wet from irrigating. The stacker (barn on wheels) was 24 feet long and 11 feet, six inches wide and could hold eight to nine tons of cut hay.

Is it déjà vu when people just don’t listen to instructions? Yea, I know you’ve already guessed it. It got stuck! It was probably half full and buried in mud up to the frame with its top tires barely visible.

So the owner sent his hired hands to find wood. I didn’t see any trees, fence line (for posts) or anything as far as you could see. But incredibly, they brought back some wood, jacked the barn up, placed the wood and let it down so the wood disappeared. Out they went again to find more. Eventually they got it up, but the Old Case wouldn’t pull it out. It took three tractors to pull it out. That made for a long day.

One good thing happened though as we sat in the shade of the barn on that hot July day. As we were waiting for more wood to show up, the land owner pulled out of his pickup some just picked cantaloupes and watermelons and we enjoyed the best, sweetest melons I’ve ever eaten in my whole life.

Hope your work days in the field are less complicated!

This article is dedicated to my family, who puts up with my tractor disease—my loving and caring wife, Suzanne; the kids, David and Amy, who have been there to lend a helping hand; and the grandkids, Tommy, Alexa, Brayden and Cash, who seem to like riding around on those old tractors