Most everyone knows that John Deere, after losing his father at an early age and through his mother’s encouragement to learn a trade, became an apprentice blacksmith. He was a hard working and very particular man who was dedicated to do the best job he could and this led early on to a very good reputation, making him sought after as an employee. He soon was able to start his own shop and, being a much better blacksmith than a businessman, he had several partners in Vermont. Through hard luck with shop fires and a bad depression in the area, he left family in Vermont and, following many other Vermonters, relocated to Grand Detour, Illinois.

There were several others who had already moved there, including Leonard Andrus, who (along with a couple of cousins) had already started a sawmill and gristmill. This sawmill broke down about the time John arrived so he built a temporary forge and repaired it. After seeing the difficulty of farmers fighting the fertile but sticky soil, he built a steel plow from a broken saw blade, which worked well, thus starting one of the world’s most successful farm equipment manufacturing companies. He became partners with Mr. Andrus and this was the first in a long line of partnerships in Grand Detour and continued in Moline.

There were other partnerships in Grand Detour and many more after the move to Moline. Some were very good, others probably closer to the other end of the scale, but they all were part of the long series of events that formed the future of Deere & Company. To go through these partnerships would be the making of a book rather than a story. Many of these involved family members and others who helped John Deere greatly. As the company expanded into numerous implements, these partnerships helped the growth. Deere’s expansion was mostly through designing its own implements and even more so by buying smaller but successful companies with established lines of equipment.

In the early 1900s, IH purchased many of its competitors in the harvesting manufacturing business and controlled much of this market. Deere wanted into this market at the time and researched how best to do this. With J. I. Case the primary builder of threshers and the companies doing about the same amount of total sales in agriculture manufacturing, it became natural to think that they could possibly become great as a joint company. The negotiations didn’t go too far as it was obvious neither side was willing to give up what they had going for them. It would have been interesting to get into “what if” on the name, maybe “John Case,” “Case Deere” or even “Deere Case”!

IH, the giant of the industry at this time, was interested in getting much bigger. They wanted to keep Deere out of harvesting equipment and stick with their plows in the U.S. and purchasing plows from Deere for Canada. This led to thoughts of consolidation of the companies for advancing sales in both countries. There probably wasn’t much chance of this ever happening, but it did lead to meetings between Cyrus McCormick and William Butterworth, leaders of each company. Would have there been red Deeres, green Internationals or the use of both colors together?

In 1910, the directors and stockholders of Deere unanimously approved to perfect unification of their allied factories and disturbing houses there for creating Deere & Company. Many of these companies were owned by Deere, but were still operating mostly on their own; all joined together to strengthen the company, protect it from strong competitors and bring it t to a full line farm equipment manufacturer. Some of the larger ones included: Union Malleable, Deere & Mansur Planter and Fort Smith Wagon Company. They soon added Manseilles Manufacturing and Kemp & Burpee, adding corn shellers, portable elevators and manure spreaders to the line.

Joseph Dain’s company retained its separate identity while becoming part of Deere & Co. with the hay equipment factory in Ottumwa, Iowa along with his factory in Welland, Ontario, thus strengthening their sales in Canada. These factories are still going strong with the addition of many lines of equipment. Later in the year came the Syracuse Chilled Steel Plow Company and Van Brunt, which established Deere in the drill and seeding business. Seeding has been moved; however, the plant in Horicon, Wisconsin has been used for the lawn and garden equipment since 1963.

Deere’s entry in the tractor market began in 1918 with the purchase of the Waterloo Boy Company and we all know how far that has come. This was a large part in Deere becoming involved in worldwide sales. The company sold several tractors in the Soviet Union, leading to increased sales of other equipment. Deere and other American manufacturers had been developing a good market in Argentina, which began before the turn of the century and developed into a very lucrative market. The stock market crash in 1929 had a very bad effect on the Argentine economy.

John Deere’s first official sales in Canada started in 1878 in Manitoba with a partnership with Westbrook and Fairchild and soon spread with new branches across the country. The unique features of Canadian- American interactions kept most other companies from expanding or opening plants in Canada back in 1931 and John Deere had its factory in Welland, which gave a great start in a very good market.

What would probably now be thought of as an unlikely source would be Deere’s early association with Caterpillar. Deere, being an agriculture oriented company, didn’t push into the industrial market very hard at first, but in 1926, introduced the “DI,” which was a basic “D” with hard rubber tires. Pneumatic tires weren’t used on tractors until 1931 and Deere first used them in 1934. Allis and International started making truck tractors in 1934, which became a concern for Caterpillar, which really had no desire to make a wheel tractor, so they turned to Deere for the “DI.” At that time, Deere felt the same way about not making track tractors so with Cats well established marketing in the U.S. and worldwide, it would be natural for them to establish joint dealerships. Naturally there were concerns whether each would try very hard to sell the other’s products. Cat had a well established combine business on the west coast and preferred to concentrate on the construction industry, so this led to them making an agreement. This seemed to work well in many cases and several of these dealerships lasted into the 1960s. Purchasing Cat’s already well established combines gave them a great start in the harvesting market. 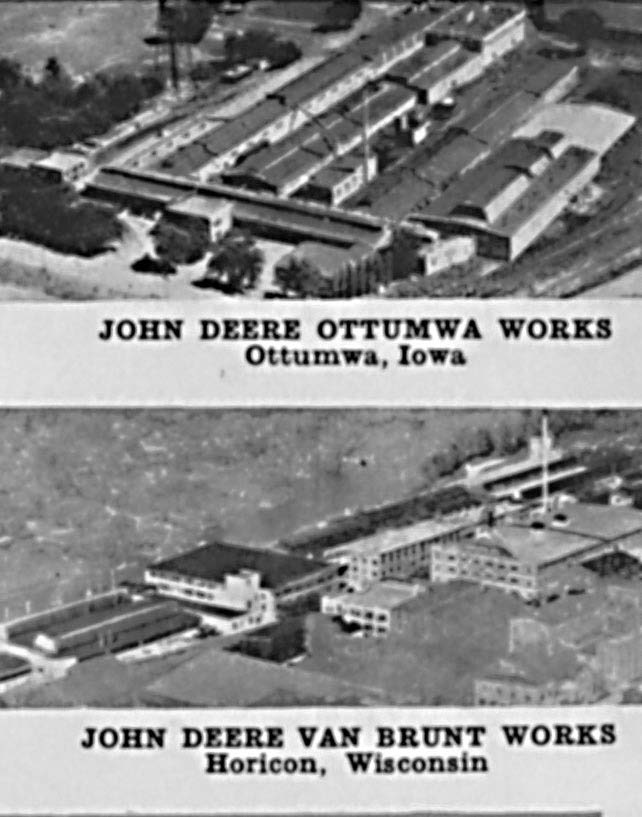 After the famous Ford-Ferguson breakup, Ferguson merged with Massey-Harris in 1953, creating a large worldwide organization. Deere wanted to expand its worldwide market so negotiations began. Complications in joining two large companies between the U.S. and Canada would be difficult and there were fears of antitrust implications since both companies were very strong in the harvesting market, so this possible merger didn’t get far.

All this merger research made me realize that John Deere being the only major agriculture manufacturing company surviving without a merger is truly amazing. There were many decisions made over these many years, so most of them must have been good ones to be so successful.

The cold winds this time of the year remind me what an old friend told me many years ago: “The wind is too lazy to go around you so it just goes straight through you!”