Part of the fun of collecting is seeing the vast array of different types of literature and memorabilia that is out there in the farm world. Recently we came across some bottle openers at the Mid-America Gateway Farm Toy Show. You don’t really think about the importance of a bottle opener until you try to open a bottle. Can you imagine trying to open a bottle
without an opener? If it doesn’t have a twist top, oh my!

This handy little item is not only a promotional item that offers a great advertising tool, but it is quite useful as well. The companies that printed their names on them probably realized right off the bat that these little darlings were going to end up in a handy spot right in Mrs. Collector’s kitchen!

I love delving into the history of the collectible item and the story of the bottle opener is fascinating as well. 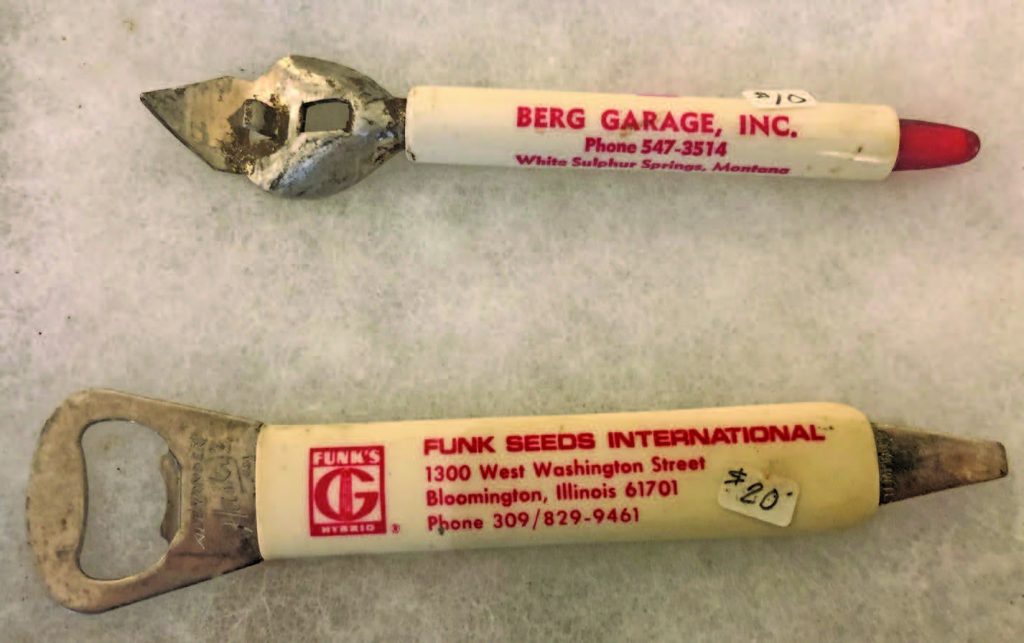 With a little research, I learned that William Painter was an Irish mechanical engineer and inventor. He invented the crown cork bottle cap and then patented the first tool, the church key cap, to open it in 1894. According to an article by Michele Alice, “The crown cap consisted of a metal cap with a corrugated flange pressed around the lip of a bottle. A thin slice of solid cork served as the liner, helping to seal the bottle against contamination. To pry off the caps, simple tools resembling the bottle openers of today were used.”

Before this, in the 1850s, most bottles were sealed with wooden or cork stoppers. History that I found stated that the first screw off cap was introduced in the 1850s. Beer brewers used porcelain stoppers held in place with a wire bail to seal their bottles. After the introduction of Painter’s bottle opener, a wide variety came about, and then in 1925, the wall mounted bottle cap opener made it easy to pop off the top using just one hand.

One of the openers was from a Funk Seeds International business that had been located in Bloomington, Illinois. The other can or bottle opener was from Berg Garage in Sulphur Springs, Montana.

Nancy and Kevin Collins were also set up at the show and had a few cool bottle openers as well. Nancy showed me a bottle opener with the intriguing name “Harvester Club.” This particular bottle opener was still attached to a cardboard piece with directions—it is an opener on one end and a light on the other! 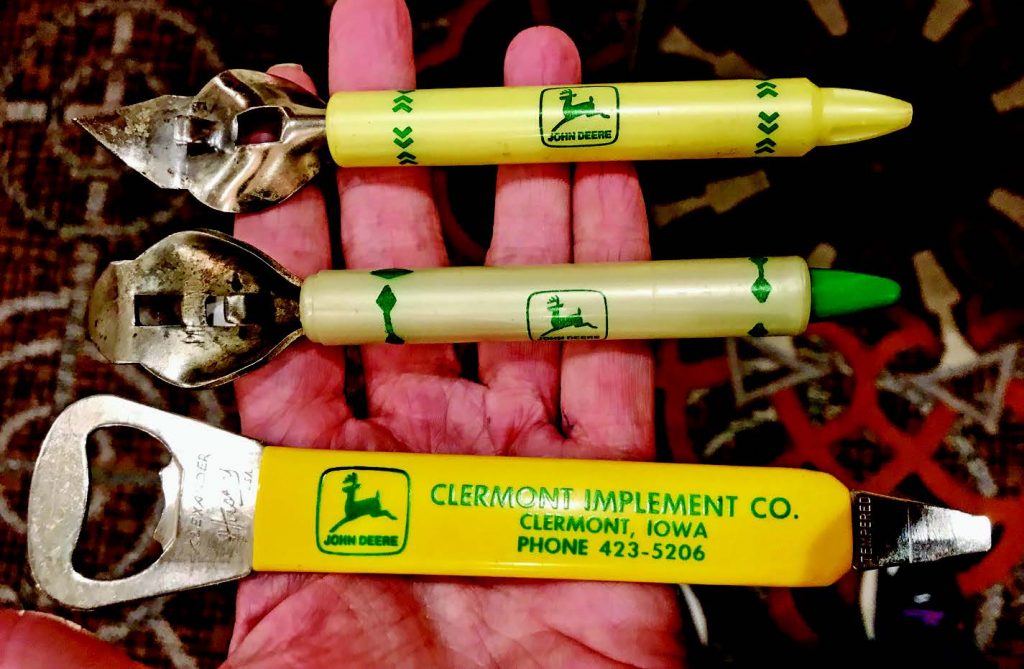 The Collins also had another IH opener from Jewell Implement, as well as three very distinctive John Deere bottle openers, each with different types of openers on the end. Ingenuity was the name of the game.

Checking on eBay, I found some Ford gas and tractor oil vintage bottle openers along with a fun bottle opener in the shape of a tractor. This bottle opener was from Big Sky Carvers and
was for sale for around $16, which seemed to be the price we often saw at the show. There was also a new mounted tractor with a bottle opener attached. This isn’t vintage, but was kind of cool.

There was also a deer mounted bottle opener; again, this wasn’t vintage, but rather cool! The bottle openers above and below are from the collection of Nancy and Kevin Collins.

There were several flat stainless steel bottle openers with an opener on each side. Again, these openers did not appear to be very old. I saw International Harvester and John Deere versions of each.

I didn’t see tons of varieties of bottle openers with antique tractor companies featured among the many beer and soda brands, but keep your eyes open—you never know what you may see!