The story of the Knudson farm tractors starts with the inventor, Jerome Knudson, and his ranch near Crosby, North Dakota, where rolling hills created problems in farming on a large scale. Knudson was a natural mechanic and would tackle anything that had wheels and a motor. Knudson had a knack to make things work a little better. At his shop in 1967, at the ripe age of 23, he developed his own tractor with crab-steering, plus four-wheel drive suited to farm the hillsides of North Dakota. This tractor developed 335 horsepower so he called it the Knudson 335. He decided then and there that he had a product that other farmers could not resist.

In 1967, he demonstrated his tractor at the North Dakota State Fair, attracting great interest from local farmers who were looking for a large tractor that would allow them to cover more acres in a day.

Jerome Knudson was reported to have signed an agreement in 1973 with Anderson Manufacturing Company of Southey, Saskatchewan, Canada, which gave Knudson several sales outlets in Canada and the U.S. Legend has it Jerome drove the powerful “335” in cold weather from North Dakota 175 miles to Regina, Saskatchewan, where the Premier of Saskatchewan witnessed the official signing of the agreement. Aiming for larger farms of 2,000 acres and up, Knudson built his tractor for a 10-year life expectancy. Knudson stepped into full-scale production by hiring three men and setting a goal of a dozen tractors. 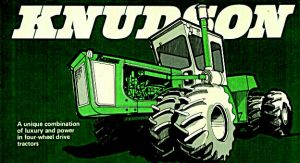 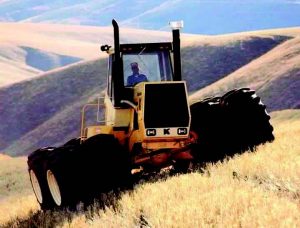 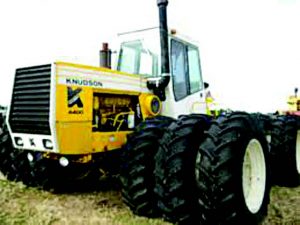 Crosby, North Dakota—a remote town nestled on the lonely North Dakota prairie near the Canadian border—seems like an unlikely place to start a small factory. But, on the other hand, maybe it isn’t so unusual after all. At his new factory, he built two models. The 260 and the 360 were both painted green and white. His original 335 had a used Cummins 743 cubic inch diesel engine that produced 220 horsepower. A five-speed Spicer transmission was attached to the back of the engine, which was then connected to a twospeed Rockwell transfer case, giving the tractor 10 forward speeds and two reverse speeds. Jerome’s second tractor was the same basic design and used a Cummins 855 cubic inch engine that produced more power at 335 horsepower.

The Knudson tractor factory began making the model 260 with an 855 cubic inch Cummins diesel engine that produced 310 horsepower. The model 360 had an 855 cubic inch turbocharged diesel engine that produced 360 horsepower. The two models could be outfitted with either a manual six-speed Spicer transmission and Rockwell twospeed transfer case or a power shift transmission that employed a sixspeed transmission and transfer case built by Twin-Disc.

Having grown up on a farm in northern North Dakota, Jerome Knudson was well aware of the severe weather of winters and summers, and of the lack of any comfort provided by an open-station tractor. He made sure his tractors provided a cab tall enough for a tall operator to stand while driving the tractor. Rubber mounts and insulation were added to the cab to reduce vibration and noise. A deluxe seat was also added that could swivel to look out the back window.

A self-leveling feature added to his tractors in 1974 allowed their use in steep hill country, ensuring proper oil levels in the engine and transmission, as well as greater operator comfort. The self-leveling feature used a mercury switch to shift the weight of the tractor to the upper wheels. This hillside tractor was designed for operation in hills like those of the Palouse area of Washington. 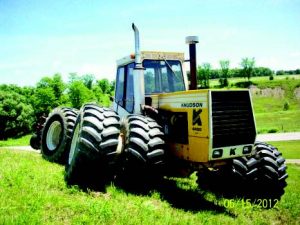 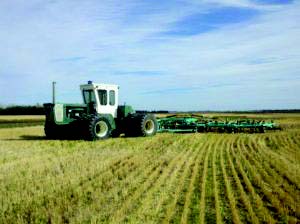 Knudson built 22 tractors in his farm shop and secured a patent in 1977 for his tractor design. He sold his patent and manufacturing rights, as well as the Knudson name and logo to Allmand Brothers from Holdrege, Nebraska. And to my knowledge, it is the only tractor manufactured in Nebraska.

The Allmand Brothers gave the tractor a whole new look and painted it yellow. They produced two models of tractors: the 4360 and 4400. The two models were almost identical and had the same components—except the 4400 had a Cummins NTA-855-C six cylinder, 855 cubic inch diesel engine that produced 400 horsepower, while the 4360 had the same make and model engine but produced 360 horsepower. Allmand Brothers further improved the creature comforts of the tractors’ cabs by adding heating, air conditioning and AM-FM radio. No one knows exactly how many tractors were built in Nebraska. But it is believed about 35 were built from 1981 to 1983, before a poor farm economy brought an end to their tractor production, and Knudson and Steiger were both absorbed by Case-IH.