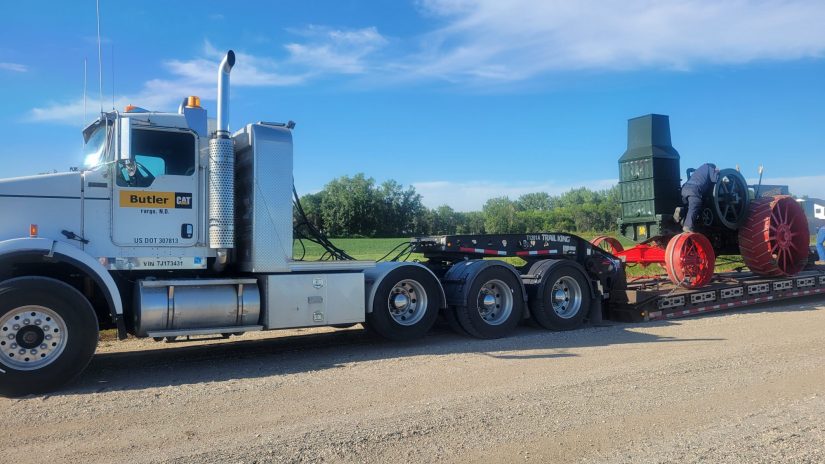 Who is Kerosene Annie?
Kerosene Annie is one of a couple of experimental Rumely Tractors and the only one remaining. They were produced by the Rumely company for testing and trials and are known as the matriarch of the Oil-Pull Tractor line. There are several features that differ from the final production tractors.

How did Kerosene Annie Come to Be?
Rumely Oil Pull was a line of farm tractors built by the Advance-Rumely Thresher Company from 1910 to 1930 in La Porte, Indiana. The first Rumely “Oil Pull” tractor was tested in 1909, and the machine became known as Kerosene Annie due to its ability to burn this fuel. The engine featured a special carburetor designed by John Secor and W.H. Higgings that injected water to help control the combustion process.

The type ‘B’ Oil Pull was the first Rumely to come off the line. Out of the 935 produced, there are 23 known to exist today. This is a 2.46 percent survival rate. They are odd, with their small-looking rear wheels and huge radiator. It was started by the operator stepping out of the cab, climbing onto the flywheel, and using his body weight to get it turning, then quickly rushing back into the cab to adjust the choke and try to keep the engine running.

Meinrad Rumely was born in Baden, Germany, in 1823. He left Germany to follow his dreams in 1848 after being pistol-whipped in the German army because he wasn’t standing correctly in line for inspection. He and his brother Jacob set up a blacksmith shop and foundry in La Porte, Indiana, and in 1859 the Rumely separator won first prize at the U.S. Fair in Chicago, Illinois. The company produced mostly steel threshers until they introduced their first portable steam engine in 1872. In 1886, the company introduced its first traction engine. The company grew rapidly, and by 1896, offering an extensive line of steam tractors, portable steam engines, and separators. Meinrad passed away in 1904 at the age of 79. Edward Rumely, Meinrad’s grandson, took the helm in about 1907 and entirely changed the company’s direction. While studying in Europe, Edward became friends with German engine designer Rudolph Diesel. They sketched an internal combustion engine, but it wasn’t until John Secor and his nephew, William Higgins, came to work for Rumely that the company’s internal combustion-driven tractor became a reality. That invention carried the company well into the 20th century.

John A. Secor started work in New York with his father, a builder of steam engines. In the late 19th century, he proposed “explosion engines,” a revolutionary design to replace steam engines in ships. He had a premonition that directly using power from oil could bypass the inefficiencies of steam engines and eliminate the boiler and its need for massive amounts of coal and water. Secor was an innovator and immediately upon his arrival in La Porte in early 1908, he set to work on the task of designing a new tractor that would run on kerosene. Gasoline in 1910 was the fuel of choice for automobiles, with a market price of 25 cents per gallon. Kerosene was an abundant byproduct of the refining process and sold at 5 cents per gallon. If kerosene could be made to work reliably, it would result in substantial savings. From 1910 to 1931, over 58,435 Oil Pull tractors of assorted sizes were built and shipped around the world. On October 2, 1911, a special plowing demonstration was held at Purdue University. Three tractors were connected to a specially built, 50-bottom plow that cut a 60-foot-wide furrowed path. A record was set for plowing 14 acres per hour on that day.

It was due to the forward-thinking of Meinrad Rumely’s grandson, Dr. Edward Rumely, who believed in an internal combustion engine and the creativity and innovation of John Secor and his nephew, William Higgins, that in 1910, the production of “Kerosene Annie” began and proved very successful both at home and abroad. 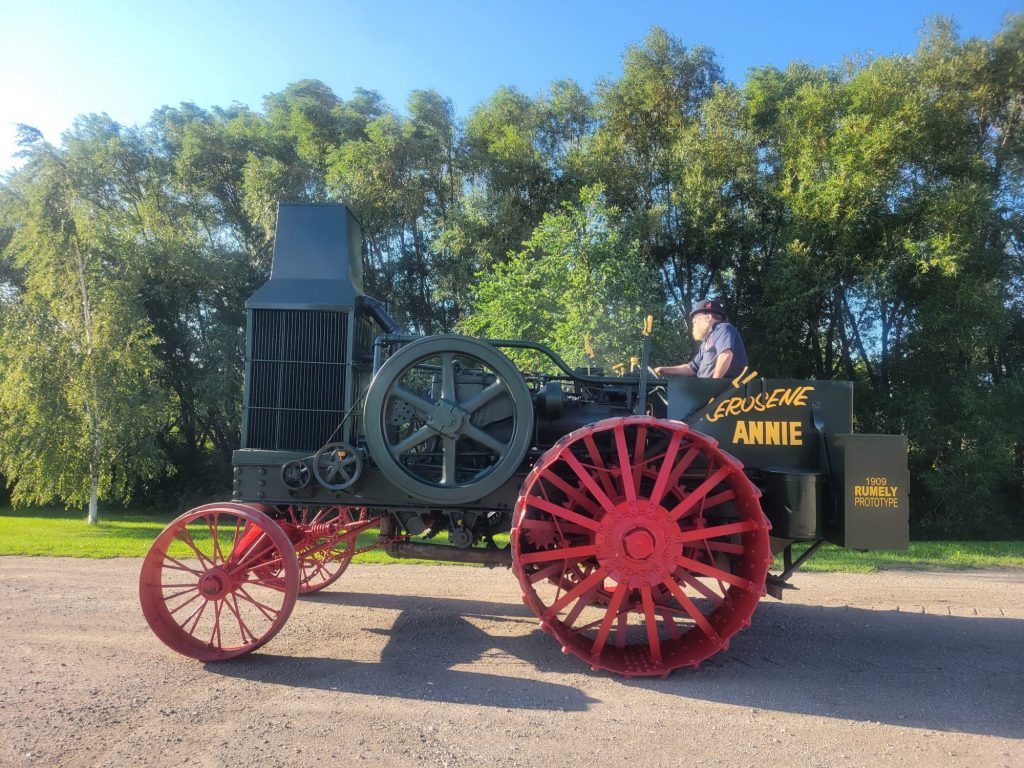 The Trip to Rollag, MN
Kerosene Annie left for Rollag, MN, with a few scheduled stops along the way, in early August of 2022. Luke Steinberger, Rumely Feature Committee Lead of the Threshers Reunion, was not satisfied with the tractor being just a static display. In order to get the tractor in operating condition, volunteers worked on it for weeks. The plan is to not only make Kerosene Annie run but also make it fully operational and to plow during the Threshers Reunion in Rollag.

Below are excerpts from the journal of Luke who is overseeing the journey.