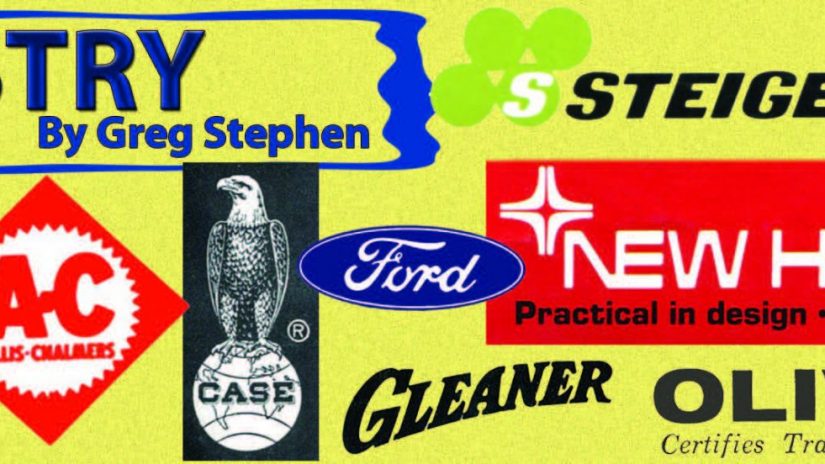 I am sort of doubling up with this article. What we’re going to be looking at is the bicentennial edition of John Deere’s Furrow magazine. The Furrow is a Deere publication that was first published in 1895 and is one of the earliest of its type in the world. While it was at first nothing more than a magazine of ads, over the years it has evolved into a topical publication that contains articles and information relevant to today’s farmer. Deere offered a special bicentennial edition in their November/December 1975 issue. Inside was a look back at the history of mechanization on the farm and it was a fascinating read. As its subject matter was the distant past, an article about it was more appropriate for Green Magazine and that is what I did. However, there was still more information contained in this issue besides the bicentennial insert and that is what we will be looking at this time.

Our first photo is the cover of the November/December 1975 issue of The Furrow. Fence building is the subject of the cover and at the bottom right hand corner, it says a special bicentennial insert is enclosed.

John Deere had changed the name of the long-standing tradition of John Deere Days to Farming Frontiers. They would, in later years, change it back; however, in 1976, we were stuck with Farming Frontiers. This once yearly event was held by local John Deere dealers as a kind of an open house. This served to thank customers for their business as well as allow them to see the John Deere film that was presented every year to attendees. The film always included a bit of humor interspersed with topics on what was going on in the world of farming as well as Deere’s new equipment. The film was always eagerly anticipated.

John Deere Day or Farming Frontiers could take different forms with different dealers. Some dealers had full sit down dinners, others served coffee and donuts while others had the entire affair catered. Our dealership, for the 30 years we owned it and for many before we did, always had a pancake breakfast. Pancakes, pancakes, pancakes… everywhere there were pancakes. To this day, I usually only have pancakes about once a year! They were good but there was too much of them, even if it was only for one day a year. We also served ham, coffee and soda.

The film was usually shown twice and then we would give away various gifts. Specials on toys and parts were usually offered on this day and we had a good customer turnout. Photo 2 is the ad on an inside page asking people to attend Farming Frontiers ’76. It talked about keeping up with the continuing changes in agriculture as well as the advances in Deere’s equipment. The color and graphic layout is an attention grabber on this ad for sure.

Deere offered seven reasons for leasing your farm equipment in this ad (Photo 3). The 80 horsepower model 4030 tractor had been introduced in 1972 and one is shown here working in the field. The orange, yellow and red colors around it are certainly taken from the 1970s’ color palette. Financing at this time was offered by JDFP—John Deere Financial Plans.

In 1976, Deere was full swing into snowmobiles (Photo 4). Deere introduced them in 1972 and would finally phase them out in 1984 so snowmobiles were still an important item for Deere at this time. The Cyclone was offered with a fan cooled 340 cc or 440 cc engine, but the high performance sled was the liquid cooled Liquifire. These are my personal favorites of all the ones Deere produced. I have several Cyclones and Liquifires from this era. Do they run you ask? Well… next question!

To add balance to The Furrow’s mix of advertising and articles, a page of “Fun & Philosophy” was included. Comics and quotes were listed and, as with many pages like this from the past, the humor can seem dated and quaint. Some do bring a smile too though (Photo 5).

Photo 6 is the cover of the special farm mechanization album Deere included as an insert in this issue of The Furrow for a vicentennial salute. I covered this in an article in Green Magazine so if interested, search for a copy and check it out.

New for 1976—hard to believe this was 43 years ago, isn’t it? Once again, the colors and graphics definitely are from the 1970s. What a great shot of the front of a row crop John Deere tractor, too. Deere offered a 12-page spread of “The Long Green Line” after this opening page (Photo 7).

Deere showcased a few pieces of equipment in Photo 9. I especially remember the 155 rear blade as we sold a few of them. They were not inexpensive, even in 1976, but they were certainly a heavy duty blade and both tilt and offset the blade hydraulically. Looking online, the 155 rear blade still commands a price in the high $3,000s. Not bad for an older blade. Stacks weren’t common in our area, so we had no experience with the shredder/feeder and most bales at this time were still the small rectangular although round bales were becoming more common.

Stine cultivators and grain carts were spotlighted in Photo 10. Again, these weren’t common pieces of equipment in our area. The seed monitors certainly speak to the level of technology in 1976. Contrast these with today’s multiple screens and online monitoring. It’s crazy how far farming has progressed.

The 146 loader was a popular loader for us; we sold quite a few and in fact, there are still some in the area. We probably sold more of the 145 loader though and later the 143 when the first of the MFWD utility tractors came out. The 143 was the only one that fit these MFWD utilities for a long time. The 350 sickle mower was a better seller for us than the 450, although we sold a few of the 450. It’s fun for me to see some of this equipment again as 1976 was the year we bought our dealership. The ground shot of the utility tractor at the top is nice, too (Photo 11).

Our dealership was, in 1976, primarily in a ranching area with a growing homeowner presence. Hay equipment was important as were utility and, when introduced, compact utility tractors and equipment. The mower conditioners were popular and the 45 rear blade was a very common item to sell with a new utility tractor. It was a basic blade, lacking any hydraulic functions but that kept the price down, too. There are many still in service in our area. Today our area has seen tremendous transformation into an urban area more than a rural. Small tractors and lawn equipment dominate the sales of the dealership I’m at today (Photo 12).

Photo 13 is an open invitation to stop in at your dealer to pick up a fact sheet on the new equipment dealers would soon have. The sign in the background is the one we had during all the years we were a dealer. It was a sad day when it came down; it had a sense of finality to it for sure. The dealership pictured here is very similar to what ours looks like and was common for dealerships at this time.

This is our last photo and it is the back cover of this issue of The Furrow. This issue was courtesy of C.H. Metzger & Co., the John Deere dealer in Pana, Illinois in 1976. I don’t believe there is a Deere dealer in Pana today; the nearest one is likely Sloan’s in Assumption. Those of you in Illinois would know far better than I. This Furrow was originally sent to Cecil Colonius of Nokomis, Illinois.

Today I now have it and I’m located just south of Denver, Colorado so it’s made quite a trip, hasn’t it? Someday it will move on to someone else when I’m done with it.

Torq-Gard engine oil is advertised on the back page. Torq-Gard has long been Deere’s engine oil and is still offered today although the Plus-50 ll is Deere’s premiere offering. Over the years, there has been a lot of advertising offered that was associated with Torq-Gard oil and many collectors have a small sub-collection gathered up dealing only with Torq-Gard. I have a few items myself and I remember very well the can shown on this page. Of course, plastic bottles replaced cans and today locating an unopened can is somewhat difficult. They are a sought-after item for a display. There is a version of the oil fill cap shown in this picture that has Torq-Gard oil cast into the metal and these have become collectible also. Pamphlets, hats, signs, oil change stickers and more have all found their way into the hands of collectors.

I am of an age that have a bit of a problem realizing 1976 is well over 40 years ago. Those days just don’t seem that long ago. To most today, however, the 1970s are a time only read and talked about and can seem like an age lost in the far past. We bought our dealership in 1976 so all of the equipment advertised in these pages is familiar to me and I have a soft spot for some of them. The machinery was certainly nowhere near today’s modern high tech marvels they are today, but many are still on the job performing the work they were designed to do. I even like the Torq-Gard oil as back in the day I used to place orders for this and hydraulic oil by the semi load as that is where we got the best deal on pricing. I can’t even begin to imagine how much oil I’ve sold over the past 40-plus years.

This was a neat issue of The Furrow as it not only contained interesting articles but also lots of period advertising as well as that neat vintage themed insert. It is my favorite Furrow issue of all time.

Thanks for following along with me—until next time!

Categories
Classic Farm and Tractor Magazine, Featured Slider, News
back to all news