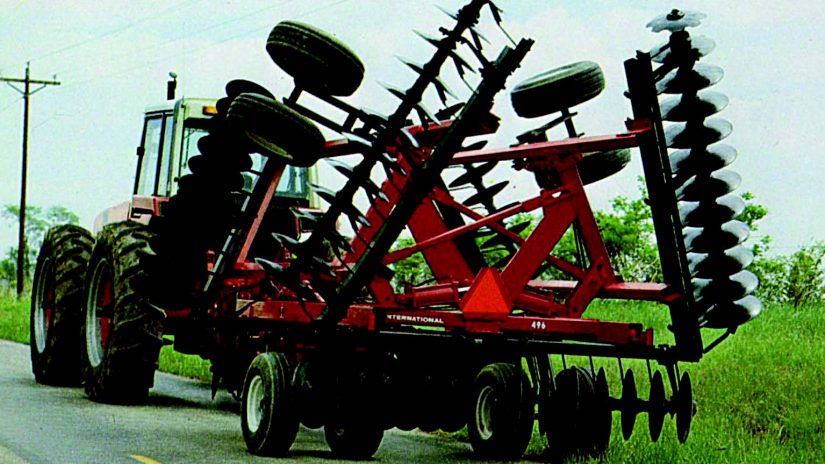 The conventional method of row crop farming in the past was to plow the soil, disc harrow (maybe more than once), possibly spike harrow the ground to smooth it and then plant. In the days before herbicides were common and effective, the crop might have been cultivated (sometimes several times) for weed control. This meant the farmer had to have several tillage tools in their shed to accomplish all this work.

The disc harrow is a simple implement consisting of two rows of concave metal blades that cut and slice the soil into smaller fragments. IH was known for making durable, long lasting and easy to use disc harrows. As farms grew bigger, so did the IH line of disc harrow models.In the early 1980s, IH introduced its latest design in disc harrow technology—the new model 496 disc harrow.

IH made many innovations to their disc harrow line from the 1960s on. The offering of larger disc harrows was the most obvious, but IH had another major innovation, Earth Metal. The Earth Metal product was a new method of making steel for tillage tools. The process to make this involved using only raw materials and NOT scrap metal like other manufacturers used. The result was a steel that could wear 40 percent longer or more, saving the farmer money by not having to buy tillage parts as often. 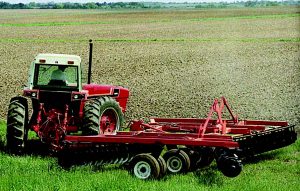 One could also equip the 496 with a $755 option (in 1981) from IH called the “Memory Depth Control.” This was not something new from IH; in fact, it had been out for several years before the IH 496 disc was made. The Memory Depth Control kit was not a set of clamp-on hydraulic cylinder stops. This attachment gave complete control of the disc harrow from the tractor seat. Once the desired working depth was established, the Memory Control system “remembered” this setting.

Many years ago, I was working for a local farmer who ran a bit of acreage (2,000-plus acres), helping them during their busy season. One of their farm fields was unique in that it USED to have a creek running through it, but sometime in the 1950s to 1960s, the field was changed to have the creek go AROUND it. This was done by creating large earthen berms on the outer edges of the field using IH TD9 dozers fitted with Bucyrus front blades. For many weeks, these dozers and a dragline created a new channel for the creek so that it would pass around the field. By doing this, an extra 100 acres could now be farmed. The soil is a black peat/loam variety that held water very well. To combat this, underground drain tiles were installed. The major problem was that the field itself was at the same level as the creek or lower, but yet the tiles were needed to carry the excess water away. (The earthen berms on the edge of the field kept the creek from overflowing into the field.)

During the dry summer months, if rain was not in the forecast, the check valve gate on the lift pump was opened, allowing water from the creek to subirrigate the field. This was a tricky operation and too much water would flood the subsoil, possibly drowning the plants roots.

One fine spring day, the field crew set out to get this area ready for planting. As always, I drew the short straw and had the IH Hydro 100 with Degelman rock picker in tow doing the “rock job.” The Hydro 100 was a dream tractor for this. The single control lever let you creep the tractor and rock picker under the big rocks and scoop them up in a flash. The quick transport speed of the dual range hydro let you get to the fence row rock pile for a quick dump and run.

The field prep crew this time was using one of the Steiger Panther III four-wheel drive tractors they owned and it was pulling a 30-plus foot field cultivator and Brillion X-fold pulverizer. The other Steiger Panther III four-wheel drive had the nearly new IH 496 disc harrow in tow. The previous fall, this section of land did not get fall plowed and it was felt that the stalks needed to be disked under before the field cultivator went over it. The spring had been dry and we were making great progress on planting, but our air filters sometimes needed daily cleaning from the dust.

Based on that fact, and that dust was being kicked up by the 496 disc as it passed through the field, we thought this would be a simple, quick, in and out and then get across the road to the next field job. We were so wrong.

I pulled into the field with the Hydro 100 with rock picker in tow and knew there were no rocks to be found, but waited for the two-way radio to alert me. The Steiger and 496 were making mincemeat out of the stalks and doing a super job of leveling them too! As the Steiger got to the end of the field nearest the road (and farthest away from ANY sources of water), I saw a puff of black exhaust as it turned its nose to me and it stopped. “Anyone have a chain?” I heard over the two-way. I carried one on the Hydro 100’s front weight bracket, just in case, but was no match for a Steiger 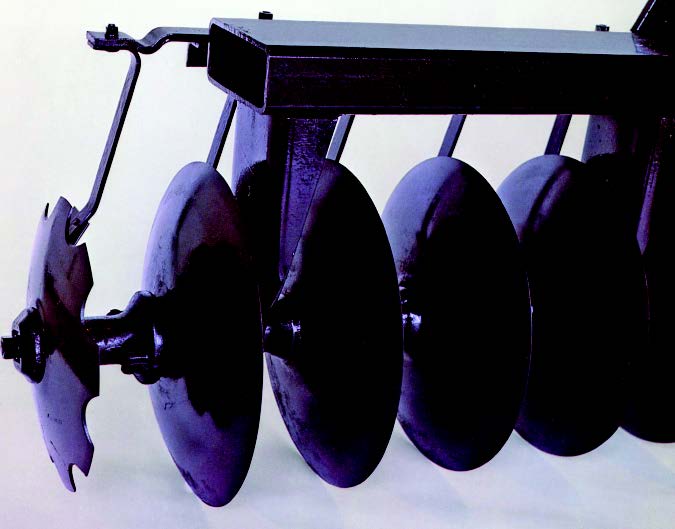 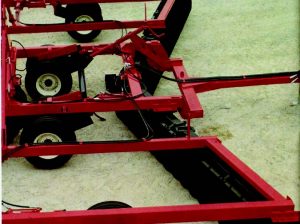 Driving closer to the Panther III, I saw the lower grille that says “Steiger” painted in white letters was a bit closer to the ground than I seemed to remember it. Sure enough, it was STUCK! The 496 disc was stuck, too! The tongue was buried in the dirt. I knew the Hydro 100 was no match to get the Panther out. The 1466 was busy pulling the planter and the 1206 (while powerful itself) was no match for this job.

We formed a plan to unhook the 496 disc to pull it out. We tried to fold the wings of the disc up, but the gangs had become so packed with soil, the rams did not even move. The axle lift rams acted the same. The tongue of the 496 needed to be dug out with a shovel in order for us to pull the drawbar pin out. I’m sure our readers can give a pretty good guess as to who’s tractor had a shovel on board (hint—it was the same one that carried a chain). I won’t lead our readers on as to who also drew the short straw to be the “shovel operator” (it was me!). After a few minutes of digging wet dirt, the pin was ready to be pulled. 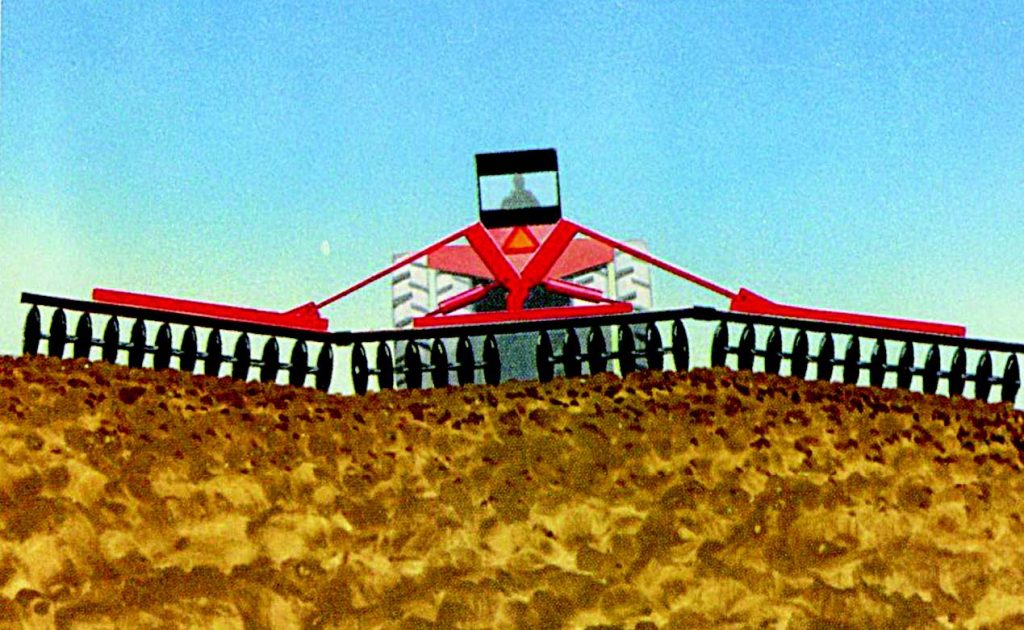 We unhooked the other Steiger Panther III and had it try to tow the stuck Steiger out. A LARGE log chain was acquired from the farm shop one-half mile away and we were ready to have ourselves a tractor pull. The first attempt did nothing to move the stuck Steiger. We repositioned and tried again. No progress, but we did break the large log chain. All the while when we were pulling, the two drivers were in their cabs and I was in the cab of the Hydro 100. I know that when chains break, someone can be killed and my life with IH equipment had a long ways to go yet. A cab (hopefully) offered some protection, just in case.

With a broken chain, we tried a large tow strap that was used once on the 1480 Axial Flow combine when it got stuck. They say (whoever “they” are; I don’t know) that the third time is the charm. The tow strap went tight, got tighter and then the stuck Steiger finally was pulled free.

The task of rescuing the 496 disc was next. With firm footing established, the Steiger was able to pull the 496 to the farm field road. We were able to scrape away enough packed dirt in the gangs to raise the disc and lock the axle in transport to get it out of there. I unhooked the Degelman rock picker from the Hydro 100 and hooked up to the 496. Since I only had to tow it one-half mile to the farm shop, it shouldn’t be that big of a deal and it wasn’t.

Before I left with the 496 disc, a quick look at our new “hole” from the tractor’s duals was needed. Water was flowing into the holes. I thought they might have struck and cut a field tile line, but this happened at the headland. Instead, it was a natural water spring that we never new existed (that is, until then).

I won’t give any of our readers a guess as to who (once again) drew the short straw on cleaning the 496 disc gangs of their packed dirt the next day either. My dirt shoveling and pressure washer skills were finely honed once again, too! The TD-9 dozer we had was called out to fill in the “divots” left by the Steiger and we were able to plant right over the spot with no trouble.

I learned that being the “new guy” at the farm meant you ALWAYS drew the short straw, no matter what the job was. I took it all in stride; it was an experience I will never forget.

In all of the years since then, this same spot in the field has never sprung a “leak” again. The IH 496 disc continued to be used for many years after this without getting stuck again.

Categories
Classic Farm and Tractor Magazine, Featured Slider
back to all news