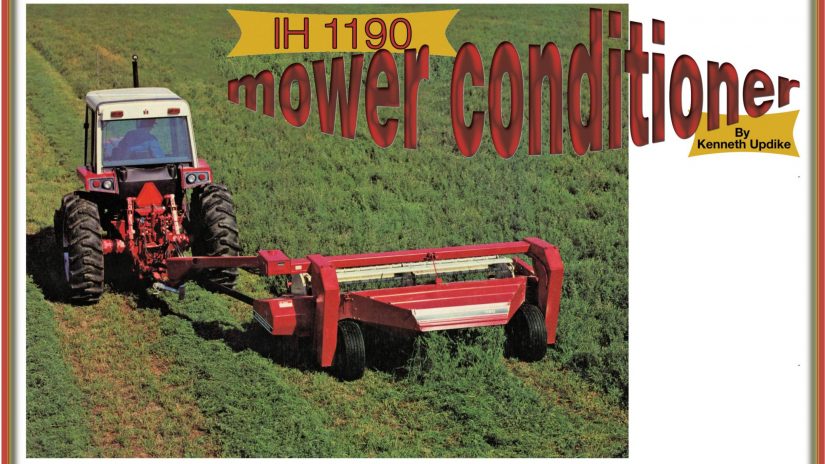 With hay and forage season in full swing now, it’s time to look at a highly successful IH mower conditioner model, the 1190. The 1190 mower was made by IH at their Memphis, Tennessee Works.

IH was quite successful with sales of their model 990 mower conditioner, but in 1978, the new model 1190 took this success to a much higher level. The features of the 1190 made it a fresh new design, not a warmed over version like many of IH’s competitors offered.

The 1190 was built in two popular (at the time) sizes. This was a seven foot or a nine foot wide cut model. There were a number of unique features on the 1190 that set it far ahead of the competition. IH used precision machined, reinforced rubber conditioning rolls. These rolls intermeshed with extreme accuracy and featured a shallow lug design that crushed the crop material and then crimped it enough to make a fluffy hay swath or windrow with a minimum amount of damage to the plants’ leaves. ONLY IH had this exclusive roll design, called the Ti-Cor roll.

Reinforced rubber discs were pressed onto a shaft and then machined to a concentricity tolerance of about 30 thousands of an inch. This extreme surface accuracy aided in delivering maximum stem crushing efficiency with a minimum of crop damage. Competitive units to the IH 1190 used molded rubber over a steel tube core design for their conditioner rolls. This created a far less accurate crimping edge that sometimes allowed gaps between the edges larger than the crop stem diameter, resulting in no crimping at all. The IH roll design had shallow, wide intermeshing lugs. The cord-reinforced rubber design of the IH 1190 rolled much stronger than a molded roll. The reinforcing cords strengthened the rubber and resisted cutting or peeling. The IH rolls lasted longer and worked better than other conditioning roll designs. 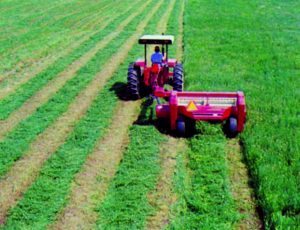 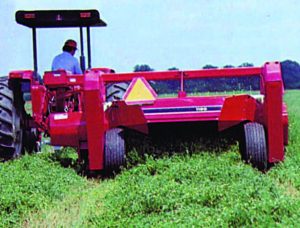 The conditioner rolls each had their own chain drive. This gave longer drive chain life and highly reliable roll performance. The most unique feature of the 1190’s conditioning rolls was how they operated. When the mower header was raised, the rolls automatically separated. This made it easier to clear out a slug or clog if this happened. You could simply clear out a slug by raising the header and powering it through. The conditioner rolls were supported by 1-1/2 inch greasable bearings. Some competitors used sealed bearings to save money here. The sealed bearings were fine for some applications, but if the bearing failed, it would cause a lot of trouble and be a costly delay in cutting hay on time.

The 1190 had an efficient power train that featured a durable, smoothrunning equalizer hitch. Called an equal angle hitch, this hitch was designed to keep the u-joint angles equal at both ends of the PTO hookup when going around curves. Whatever the angle between the tractor PTO and the power line of the machine was equally split between the two drive knuckles. This gave better performance by eliminating PTO chatter and vibration. This meant longer driveline life and less noise. 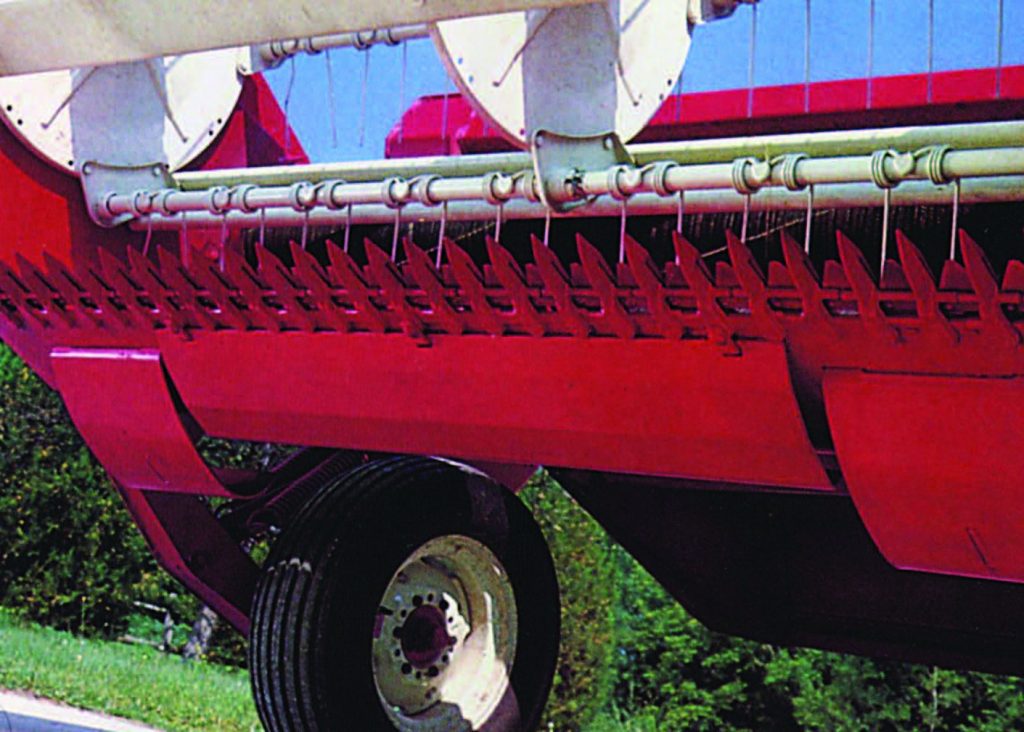 The cutter bar itself was driven by an oil bath gear box and has a three inch sickle stroke. This gear box was belt driven and changing the drive belt was easy— simply remove one drive chain, loosen the belt idler pulley arm and replace the belt. 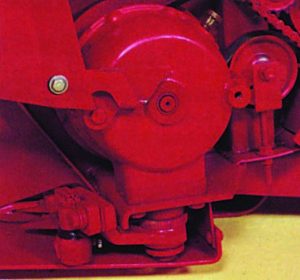 The main cross beam of the 1190’s “over the top” frame served not only as a structural member, but also as a convenient storage space for up to three complete sickles. One could simply remove the end cover plate to access this. At the opposite end of the beam, a handy pull out tool tray was provided. This placed the tools or other small parts (sections, section bolts, spare knife guards) at the right height and position for easy access without having to bend down to reach it.

The 1190 reel was a four bar/bat design. This meant it had four bars of spring loaded reel teeth that rotated to gather the crop and direct it toward the cutter bar sickle. A fifth and/or sixth reel bar could be added for an additional cost of $106 for a seven-foot cut model and $152 for the nine-foot cut model. Sometimes the additional reel bars were needed to properly feed the crop into the mower for optimum performance.

The header has both lateral and vertical float. This was accomplished by a three-point suspension system. The lateral float was automatically locked out when the 1190 was in the transport position. When the header was raised 10 inches or more off the ground, the roll opening linkage also locked the lateral float for more stability in transporting.

I’m reminded of a story about an 1190 field demo that I was sure would have happened to me. The dealership took out a new 1190 for one of their customers to try out. The hay was quite tall and thick and somewhat matted down in spots. This was their first cutting of hay for the season and they were a bit late getting started as it was a wet spring. The 1190 worked through the field with ease. While running in some very tall alfalfa grass mixture, a sudden thump could be heard and felt from the 1190. The farmer stopped (like he should have) to see what happened. Maybe it was a large rock or tree root he hit? No, it was neither of those. Might it be a tree branch or fence post? No, wrong again. When he raised the 1190 and the conditioner rolls opened, a dead stinky skunk was the cause of the thud. The skunk spray was almost unbearable. The salesman said to get cutting and stay upwind and maybe the smell will work its way out. They took off cutting and made more rounds in a different (non skunked) section of the field.

By the end of the demo, the 1190 was almost bearable to be near. The salesman hooked on to the 1190 and headed back to the shop (with the truck windows rolled up!) to get the machine cleaned and ready for another demo. When he rolled into the dealership lot, it was amazing to see how fast everyone in the shop had something very important to do or somewhere to go. Luckily, I WAS NOT the person who drew the short straw on this machine’s cleanup! Even after all of the stink that was made, the 1190 did end up getting sold.

With the financial crisis of the early 1980s plaguing IH, the IH hay tool line, along with its patents and related technology, were sold off in 1982 to New Idea of Coldwater, Ohio. IH had New Idea continue to build a number of hay tools for them, including mower conditioners, rakes and round balers. The investment needed to sustain this market was getting too steep for a profitable return for IH, so IH turned to another farm equipment manufacturer for help. This idea of “sub contracting” was nothing new for IH (or other machinery manufacturers). IH used Arts Way to build their grinder mixers and Kasten to supply their forage wagons in the 1970s. Many other manufacturers supplied machinery to IH made to specifications that IH marketing and engineering set.

Today, with most all of the “short line” farm equipment manufacturers from the 1970s either gone or merged into a mega company, it’s good to know that for machines like this, you may be able to get repair parts for them from a source other than CIH; in this case, AGCO, which owns the New Idea brand.

Categories
Classic Farm and Tractor Magazine, Featured Slider
back to all news