Huber used the Waukesha model DK engine in the 20-36. The bore was 4.75” and the stroke was 6.25” yielding 443 cubic inches of displacement. The DK was a side valve (flathead) design of engine. The cylinder blocks were cast in pairs and set on a common crankcase. Each jug had its own head. This allowed customers to replace the jugs & pistons during an overhaul. Back in the day this was thought to be an advantage to the owners who were located a long way from a reliable machine shop. Since the cylinder jugs were interchangeable front to rear on the crankcase the water pump had to be driven from a shaft originating in the timing cover and extending down the side of the engine. This shaft extended through the water pump and also drove the magneto. The DK was pressure lubricated by an internal oil pump. Many of the tractors were fitted with an external oil filter on the side of the motor.

Huber sourced components from many vendors for the production run of the 20-36. Air cleaners were sourced from Pomona, Donaldson, and Vortox. Carburetors were sourced from Kingston, Zenith, and Stromberg. Magnetos were sourced from both Eisemann and Bosh. I believe the majority of the wheels were built by French & Hecht. The clutch used was built by Twin Disc Clutch Company of Racine, Wisconsin.

Huber built a few of these tractors as kerosene burners. These tractors had a special manifold with a shroud and adjustable damper to control how much exhaust heat was used to aid in burning the kerosene. For the tractors that were equipped to burn straight gasoline the right-hand fender was never drilled for the starting tank brackets.

The 20-36 was set up in what became the typical style of a “modern” threshing tractor of the late twenties. The radiator was up front followed by a longitudinally mounted engine, an enclosed clutch in the bellhousing, a totally enclosed transmission followed by an enclosed final drive within the rear axle. The operator’s station was behind the rear axle on the back of the tractor. A pulley brake was provided to stop the transmission gears and pulley. The pulley brake acted directly on the surface of the belt pulley. A brake was also provided to keep the tractor in place or stop it from rolling. Individual turning brakes were not provided.

The first 20-36 built went to the Marion County Home Farm in Marion, Ohio. Many of the early 20-36s were exported to Canada. Benjamin Franklin Avery Company of Louisville, Kentucky, bought many of these tractors to sell as power units with sawmills they were selling. If the tractor and mill pulley sizes were appropriate for the diameter of the saw blade these tractors made ample torque for powering a sawmill.

Of the 1054 20-36s built 22 were converted to the CHS Waukesha engine. The CHS engine was a single solid block that used a single head. The CHS had the same bore and stroke as the DK. It had removable cylinder sleeves and a water pump on the front of the engine. The CHS was an overhead valve design of engine. Overall, the CHS was a more modern design of engine and ultimately proved to be very successful and reliable. Ultimately with tractor number 10689 Huber replaced the DK engine with the CHS engine. Tractors powered by the CHS Waukesha engine became known as the model HS. 14 more 20-36s were built after they began using the CHS engine, but this probably just represents using up existing engine inventory at the Huber factory. Any student of the Huber line of gas tractors knows that Huber didn’t waste anything. They would even build a one-off tractor to make a sale.

The information in this article was largely compiled out of the original Huber records and Huber sales literature.

Below is a picture of the finest surviving example of a kerosene manifold that I have ever seen on a 20-36. 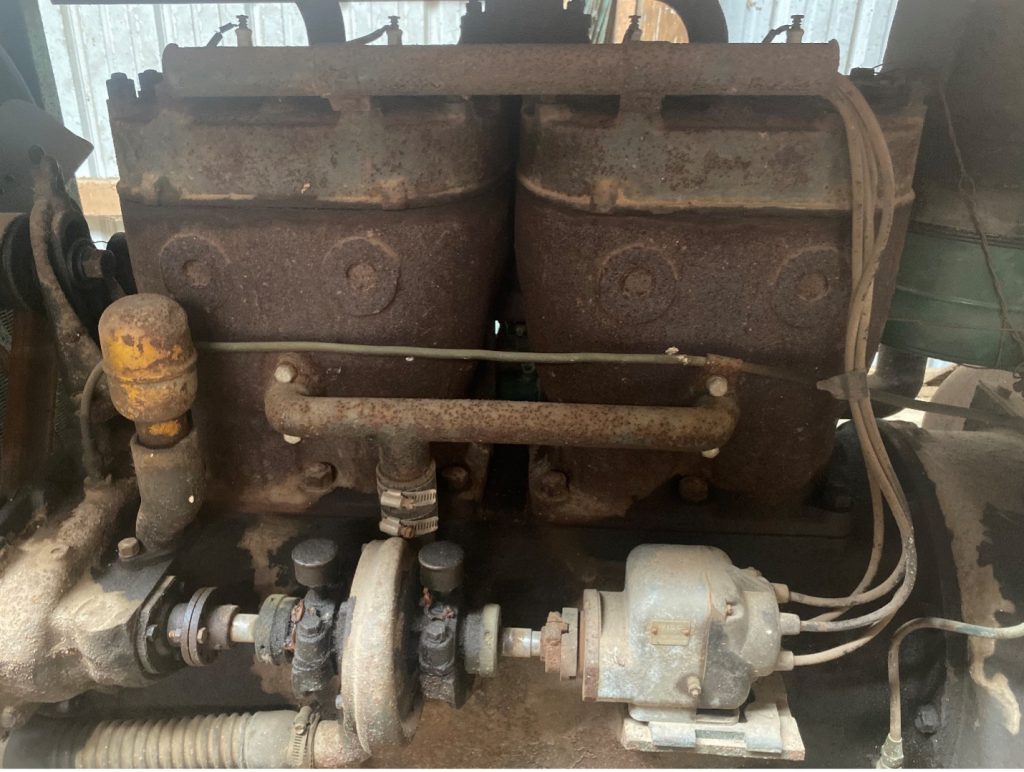