Maybe it is fitting that the styling of the Ford 6000 has sometimes been described as odd, because the story of the tractor can only be described the same way. 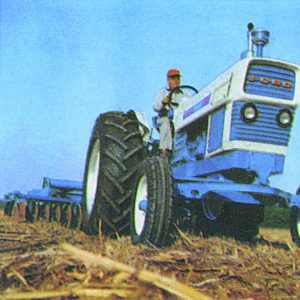 The 6000 was Ford’s attempt to change its small tractor image to one of a full line company and, at 66 horsepower, it had a good 50 percent more power than any of Ford’s previous row crop tractors. Power was produced by either a 223 cubic inch gas engine or a 242 cubic inch diesel “red tiger” engine. Either engine turned at 2,400 RPM. A closed center hydraulic system operated at pressures up to 2,250 psi and, when coupled with an accumulator, provided pressure for simultaneous functions. It also provided the boost for the category 2 three-point hitch. The tractor also had power steering and a two speed power take-off. As far as modern features went, the 6000 could complete with almost anyone.

However, it was Ford’s Select-OSpeed power shift transmission that would prove to be the source of the tractor’s problems and unusual story. It soon became apparent that under heavy use, the Select-O-Speed wasn’t able to stand up to the engine’s 66 horsepower. Unlike most companies, which would have chosen to shore up the transmission, Ford instead decided to reduce the power of the engine. So the engine was detuned and its RPM lowered; in 1963, the tractor was again tested at the Nebraska test lab, this time producing 62 horsepower.

It’s hard to figure out how exactly Ford managed to market this decision, apparently choosing to ignore it. They probably realized that the slogan, “Now with less power for ‘63” wasn’t going to increase sales.

Don’t get the impression that the 6000 was a total failure. Though hardly selling like its competitors from Deere and IHC, the big blue (no longer red, see below) tractor commanded a share of the market, particularly in areas of dealer support. Maybe the tractor’s greatest claim to fame was that a 6000 with a mounted corn picker won the national corn picking contest five of six years in the mid 1960s. The Ford Select-O-Speed transmission no doubt played a big part in the victories, giving the operator the ability to adjust his speed on the go in changing crop conditions.

By 1965, the inherent weaknesses in the Select-O-Speed were ironed out and the 6000’s horsepower was once again raised back to 66 horsepower. It now wore slightly revised styling and the “Commander” label.

When introduced in 1961, the 6000s wore the same red and gray paint scheme as the rest of the line. However, in 1962, the entire Ford line was changed to blue and gray.

Besides the row crop model, Ford also produced an “all purpose” version, with shorter wheel base, wide swing drawbar and wider tires.

Besides its styling, one of the other unique features of the 6000 was the patented Powr-Stor hydraulic system. In this system, an accumulator stored up hydraulic oil under pressure. This allowed the tractor to have the same amount of hydraulic power no matter the engine speed. Another benefit was that during periods when no hydraulic power was being used, there was no power drain on the engine. Perhaps, though, the most memorable part of the system was that the three-point or remote cylinders could be operated for a limited amount of time after the engine was shut off.

Besides the 6000’s early mechanical problems, it was no doubt a victim of bad timing. It was no doubt intended to compete with other high platform, high horsepower tractors but before it could be introduced, Deere introduced its 4010, which had 14 more horsepower, more features and better dealer support.

In spite of all this, the author has often thought that a Ford 6000 wouldn’t be a bad addition to any collection. In either red or blue, with its cool white steering wheel, it would surely stand out in any collection.