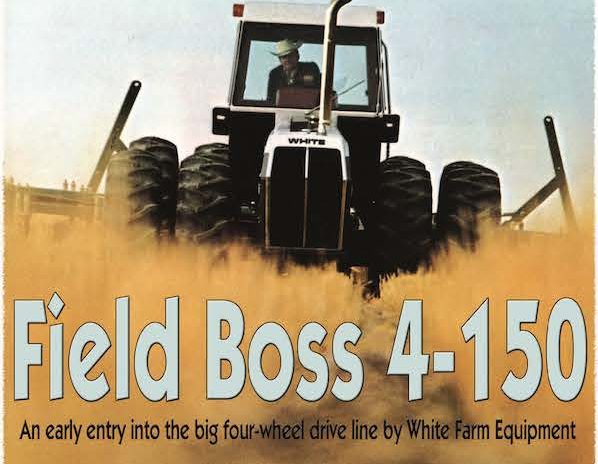 The last true big Oliver rolled off the Charles City, Iowa assembly line in 1976. While the “White” named started appearing on the green Olivers as early as 1969 with the four-digit series, the silver and charcoal paint of the Whites began in 1974 with White Field Boss 4-150. The 4-150 was the first of the big four-wheel drive White line. It was later joined by the 4-210.

The prototype 4-150 came off the Charles City line in July 1973. The design of the 4-150 was new to the White line in that the tractor had a lower profile than other brands’ four-wheel drive models with the 175 horsepower Caterpillar 3208, V-8, 636 cubic inch diesel engine producing 152 horsepower at the PTO. The big Cat engine was positioned ahead of the front axle.

The White Corporation said the 4-150’s design and production were based on requests and suggestions from farmers. When “under load,” the three-point hitch-equipped 4-150’s 7-1/4 tons were evenly balanced on its two axles and the wheels were adjustable for a variety of widths ranging from 58 to 108 inches. The 4-150 also included the suggested minimum short turning radius of 182 inches on 60 inch treads.

“The facts speak for themselves,” White sales literature said. “The 4-150 Field Boss is unique, versatile and efficient.”

The sales pitch continued, “There are many things that can be written about White’s 152 horsepower 4-150 Field Boss. It’s been said that the 4-150 is the first true four-wheel drive ‘row crop’ tractor. On the other hand, the 4-150 epitomizes the perfect blend of features for a great Big Sky wheatland tractor in other owner’s minds.”

Reaching to include as many types of farming as possible, White said the 4-150 was “far and away the best thing to happen to rice farming since high flotation tires.”

White said all of the assumptions about the 4-150 were true.

“White combines a host of engineering firsts—features and characteristics to provide the North American farmer with a four-wheel drive tractor that would fit in anywhere and accomplish most any job required of it,” White salesmen said. “A modern blend of unique and versatile features that allows the 4-150 to provide that all important characteristic known as efficiency.”

White said the 4-150 came with “universally accepted features, including an extremely tight turning radius of less than 16 feet, a narrow overall width of 80.6 feet and closed center hydraulics for fast, certain action.”

Also considered standard to the 4-150 were the 18-speed, shift-onthe- go transmission with three-speed power shift.

“And finally, the row crop farmer needed a transmission that he could shift-on-the-go,” the 4-150 brochure reads. “White provides the Over/Under Hydraul-Shift, giving him a total of 18 forward speeds and three-speed power shift as standard equipment.”

White said the 4-150 met all of those requests. “The 4-150 is powered by a reliable Caterpillar V-8 diesel engine that provides 152 fully useable PTO horsepower,” said White officials. “The 4-150’s center of gravity is among the lowest of all 150 horsepower tractors (only 37 inches above the roadway), allowing the 4-150 to virtually cling to rolling wheatland hills. Also, for our wheat farmers, we’ve provided the 4-150 Field Boss with the capability to taking on 172 gallons of fuel for more than a full day’s supply.”

While those big fuel tanks were designed for convenience, they aren’t too convenient in 2008 when diesel fuel is well over $3 per gallon. A fill up at $3.20 per gallon results in a $550 bill.

For the rice farmer, a growing market in the early 1980s, White boosted additional features for the 4-150.

“Great traction and the ability to scale rice field levees,” were provided by the 4-150, White said. “The 4-150’s four-wheel drive system is designed to split load and horsepower distribution 50-50 under load for great traction.” And, because the 4-150 is able to oscillate 30 degrees in the center, it can “step over, rather than drag over levees.”

Easy serviceability was another area given a great deal of attention. The air cleaner, oil filler, oil filters, fuel filters and fuel fillers are all on the left side of the tractor for easy one-step service. The cab air filter is serviced from outside at ground level, keeping dust and dirt out of the cab interior.