I have been fascinated by Joseph L. Dain’s tractor and the mysteries surrounding it since the first restored one was shown and most of the world became aware of its existence. Let’s take a fantasy trip back in time to imagine what could have happened if Joseph Dain wouldn’t have died at such a critical time in Deere’s development of putting tractors on the market. Many of the details of what happened 100 years ago were merely forgotten, pretty well hidden or simply lost in time.

Most of us know how dedicated Joseph was to making this tractor the best and most reliable tractor on the market by constant improvements made with what they learned in intensive field trials. His persistence and dedication is what led to his contracting pneumonia on one of those trips and dying shortly after. Deere was already negotiating with the Waterloo Gasoline Engine Company, which had a proven reliable and successful tractor and a factory producing them. It was easy for the board to decide to purchase them rather than try to perfect the Dain without Joseph’s guidance. 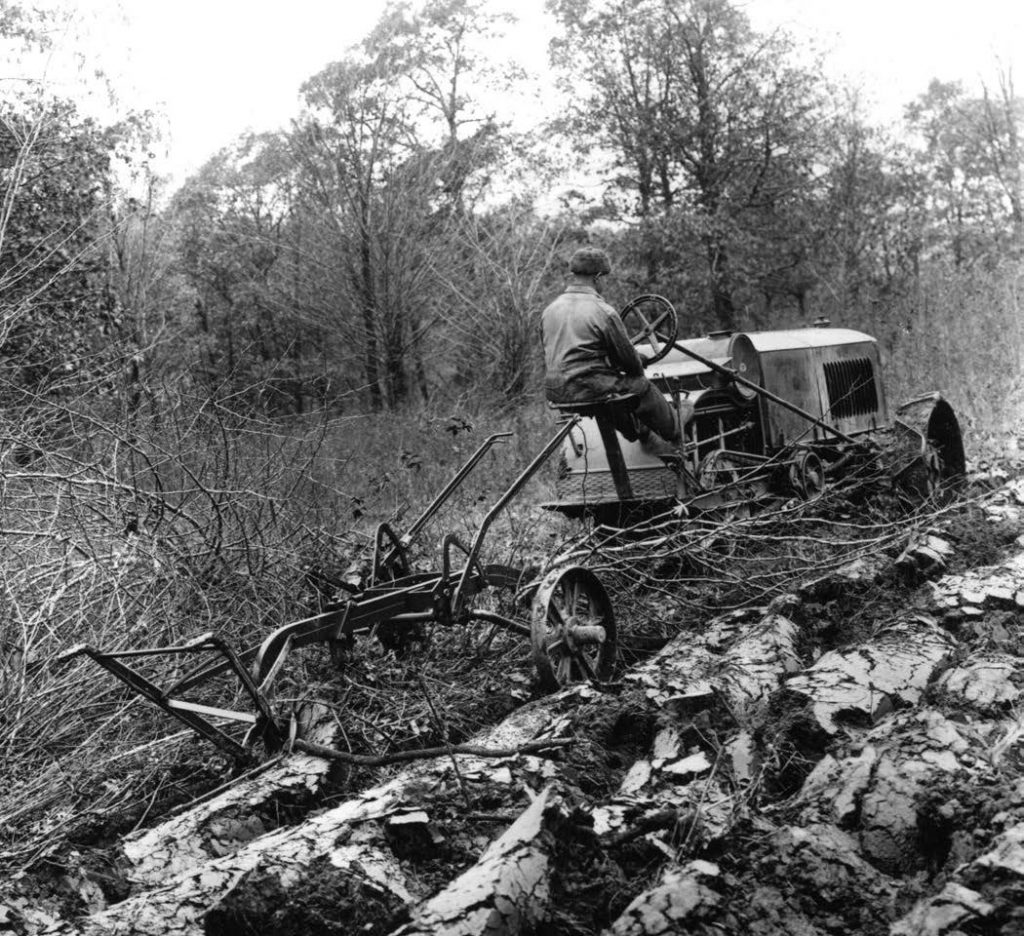 The Dain was far ahead of its time and would cost nearly twice as much to manufacture as they thought the customers would be willing to pay, while the Waterloo Boy was in the price range they were aiming at. This was also a shaky time in the farm economy with many unknown factors ahead and thus a poor time to invest in building a new and very expensive factory. There were many companies wanting to get involved in building tractors, figuring to make a good living while eliminating the horses which took up a large part of farm ground just to grow their feed. Many of these manufacturers never made it past the experimenting phase and many more didn’t last very long due to lack of financing.

McCormick Deering was way ahead of everyone else in getting a good start and Henry Ford thought he could make the Fordson as successful as the model “A” was to the automobile industry. His price cutting made it hard on everyone else as it was costing more to produce tractors than what they could be sold for.

Let’s get back to my fantasy of what could have happened if Mr. Dain would have been around. I think with his power at John Deere and the probability of the All Wheel Drive being a very feasible option, Deere could have produced two types of tractors successfully. The Waterloo Boy was well suited for the average farmer and would have done as well as it did anyway with the Dain as a brother rather than a competitor. It would have been a slow start with all the development of adding new facilities for producing them, but there were plenty of potential customers around who could have been turned into owners.

The extra traction would have been great in hilly terrain and would have worked well for large farms, especially in wheat country. The horsepower would have increased faster, enabling using larger machines and increasing efficiency enough to offset the higher cost of the tractors. 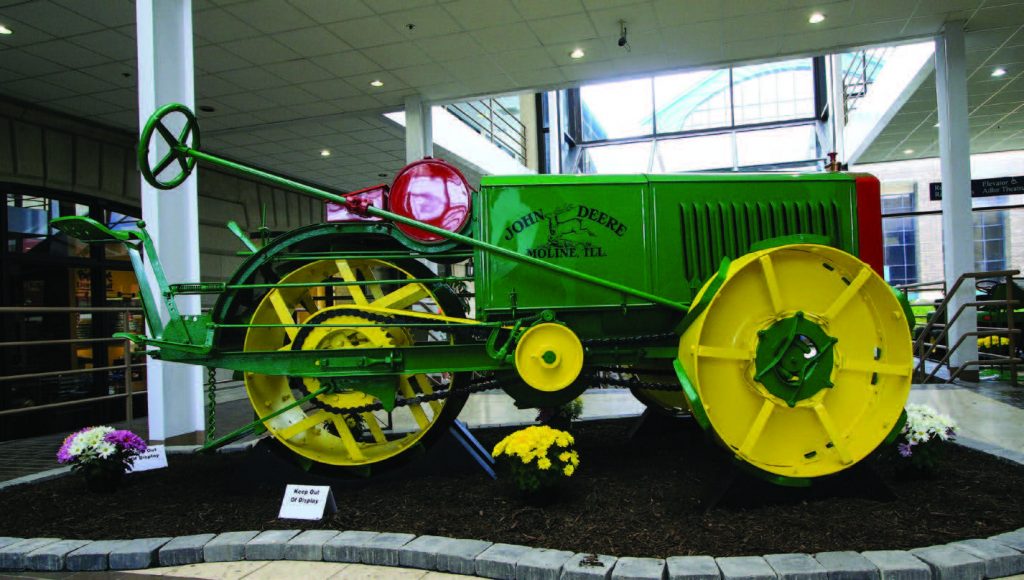 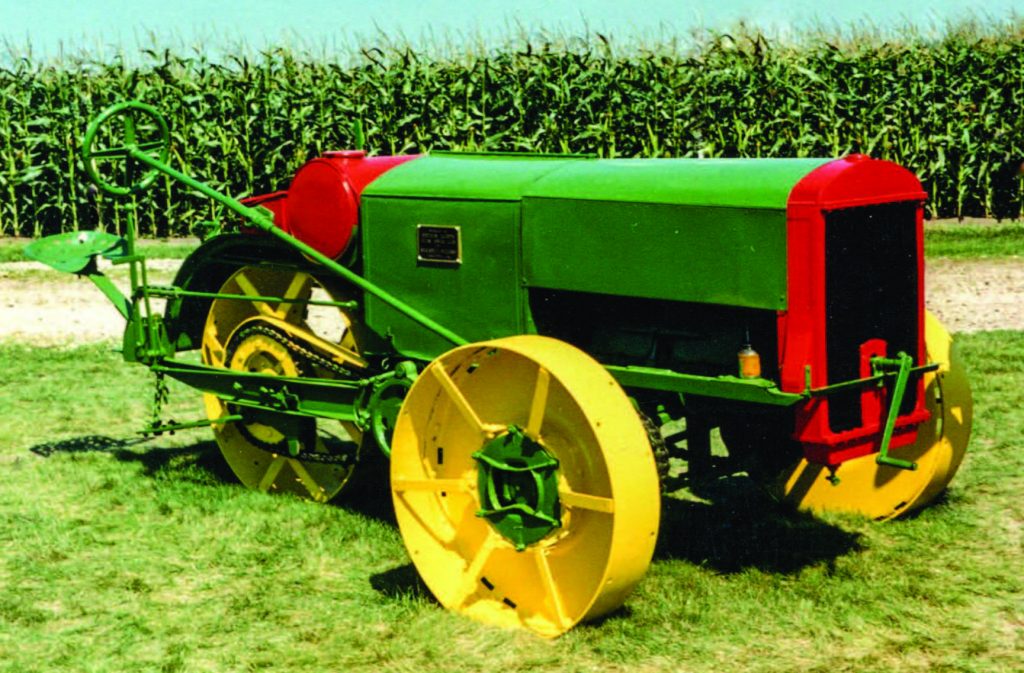 The Dain had already switched to a better engine and I have no doubt that they would have learned of the advantage of the two cylinders at the time and would have developed a larger and more powerful version to use in the Dain. The all wheel drive would have soon led to a four wheel version, which would improve stability and traction even more. Since we are dreaming here anyway, let’s envision what could have happened in the industrial side of things. Granted, tracks are great for many things but wheels have many advantages also.

The change to four and six cylinder engines would have probably come sooner and maybe the diesel also. John Deere has always strengthened all the rest of the components to keep up with the increase in power and I’m sure that would have not changed.

The legends created by the Dain wouldn’t have come about, but I’m sure we would have found ways to keep the suspense there. There are so many unanswered questions about what really happened, we will probably never know the real “rest of the story!”

Deere has always been good at hiding the ventures of experimental equipment. I’m still amazed at how they were able to hide the major changes of the New Generation tractors until their introduction at the famous Deere Day in Dallas. The media was so much more powerful then than in the days of the Dain and Waterloo Boy; it would have been much easier for them to have kept secrets.

I’m sure the 100 Dains built were a true story, but does anyone really know if the stories of dynamite in those engines or their burial in a large body of water in the Dakotas is really true? There are several interesting stories of what really happened but it will probably remain a mystery forever.

It’s quite an interesting story in itself how it changed from Deere seemingly denying and trying to hide its existence to paying a million dollars to preserve it in a museum and to show it at various well attended events. It was a real treat for us to see it at last year’s Gathering of the Green.

Many events have happened since the first restored Dain made its appearance along with the knowledge of the Layhers’ family of Wood River, Nebraska and the partial Dain they found at a salvage yard in South Dakota. Many of us found hope in the existence of one and a half Dains until Richard Hain of Green Magazine was motivated by an old family picture of what was obviously a Dain and began some serious research. He rediscovered the “Sycamore Tractor,” which Lynn Williams found in Iowa, was later restored, traveled around the country some and now resides in Illinois. Richard began his new “Digging Deeper” article in the June 2018 issue of Green Magazine with the story entitled “Two and a Half Dains.”

There is now a very slim but possible hope of more survivors, but very doubtful due to the scrap drives of World War II and the fact that it is well enough known that numerous collectors who have a great knack of finding rare treasures have probably been searching for many years.

There was a wrench auction right here in York, Nebraska several years ago at which a Dain wrench sold for $15,000. There are believed to be seven or eight of these in existence and reliable sources have told me they believe the story of a second wrench selling in the parking lot for a similar amount. I was intrigued enough by this auction to write a story about it, which appeared in the September- October 2015 issue of Classic Farm and Tractor.

Happy hunting—there are still 97-1/2 Dains unaccounted for and quite possibly a few more wrenches!