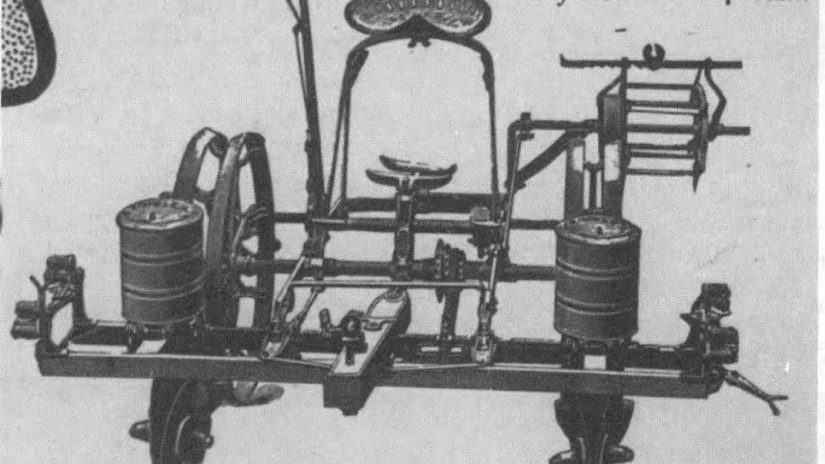 American Seeding Machine Company was organized in 1903. This merger brought together several competing companies. Ostensibly, the plan was to achieve the benefits of mass production by eliminating a great deal of competition among several small companies. The plan was partially successful in that it staved off the inevitable for another three decades. Ultimately, there were too many companies manufacturing grain drills for a saturated market, and many of them slowly withered out of existence. Others, like American Seeding Machine Company, were fortunate enough to maintain a future through yet another merger. Thus it was that American was one of the partners in the Oliver merger of 1929.

Com drills were added to the Hoosier line in 1870, followed by broadcast seeders in 1877. The following year Hoosier removed from Milton to Richmond, Indiana and built a new factory there.

P. P. Mast & Company, Springfield, Ohio was another member of the American Seeding Machine merger. This company was established in 1856 by John H. Thomas and P. P. Mast under the name of Thomas & Mast.

Initially, Thomas & Mast built grain drills and cider mills, but during the 1860s they began making cultivators and other implements. During 1871 Thomas & Mast dissolved partnership, being then known as P. P. Mast & Company. This company built the Buckeye drill.

Superior Drill Company was established at Springfield, Ohio in 1867 as Ferrell, Ludlow & Rodgers. Their Superior drills used the double distributer patents of C. E. Patric. In 1872, John H. Thomas (also of Thomas & Mast) purchased Ferrell’s interest, with the new company being named Thomas, Ludlow & Rodgers. Eleven years later, in 1883, the company was incorporated and established as the Superior Drill Company. A significant contribution to grain drill design was patented by C. E. Patric in 1882. On November 21 of that year he was granted Patent No. 267,985 covering a ’force-feed grain drill.’

The Empire drill was built by the Empire Drill Company of Shortsville, New York. This firm had its beginnings in the 1840s with the pioneering work of Gilbert Jessup. At a subsequent point, the firm of Foster, Jessup & Brown was established to build this early design.

During 1854 H. L. and C. P. Brown left the firm and moved to Shortsville, New York. Through them the Empire Drill Company eventually emerged. In 1866 they developed a single run distributor which was long known as the Empire feed. By 1878 the Empire drill had assumed the general form it would follow until the American Seeding Machine merger. During 1877 other partners came into the firm, along with the Brown’s and at that time the company was given the name of Empire Drill Company.

Little historical data has been located on yet another partner to the American Seeding Machine merger. This firm was Brennan & Company, also known as the Southwestern Agricultural Works. Situated at Louisville, Kentucky this company built the Kentucky drill.

After the 1903 merger, manufacturing operations of Brennan & Company and of Empire Drill Company were moved to the Richmond, Indiana factory formerly operated by Hoosier Drill Company. International Harvester Company contracted with American in 1912 to sell the entire output of this factory, and in 1920 International bought out the Richmond factory. In effect, this puts the historical chronology of Hoosier, Evans, and P.P. Mast under the vast domain of International Harvester Company. At this point American Seeding Machine Company chose to concentrate its efforts on drills and other implements being built at their Springfield, Ohio plant. This too came to an end on April 1, 1929, for on that day American Seeding Machine Company and three other partners lost their individual identity under the new umbrella of Oliver Farm Equipment Company.

See attached images for the rest of the article photos

Categories
Manufacturer Histories
back to all news