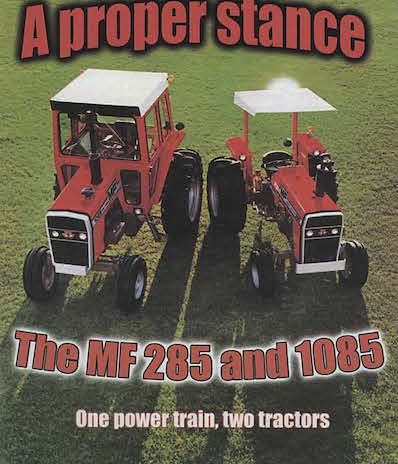 When Massey Harris acquired Ferguson in late 1953, the two companies were engaged in manufacturing two different types of tractors

For nearly 20 years, since the introduction of the “Challenger,” Massey Harris had been building primarily “platform” type tractors where the operator sat atop the transmission case.

Ferguson, on the other hand, perhaps due to its previous engagement with Ford and its very successful “N” series tractors, had been building the “straddle mount” type tractors where the operator sat lower with one foot on each side of the transmission case.

So was it a coincidence that, in the early 1970s, Massey Ferguson was still offering what was basically the same tractor in both chassis type styles? 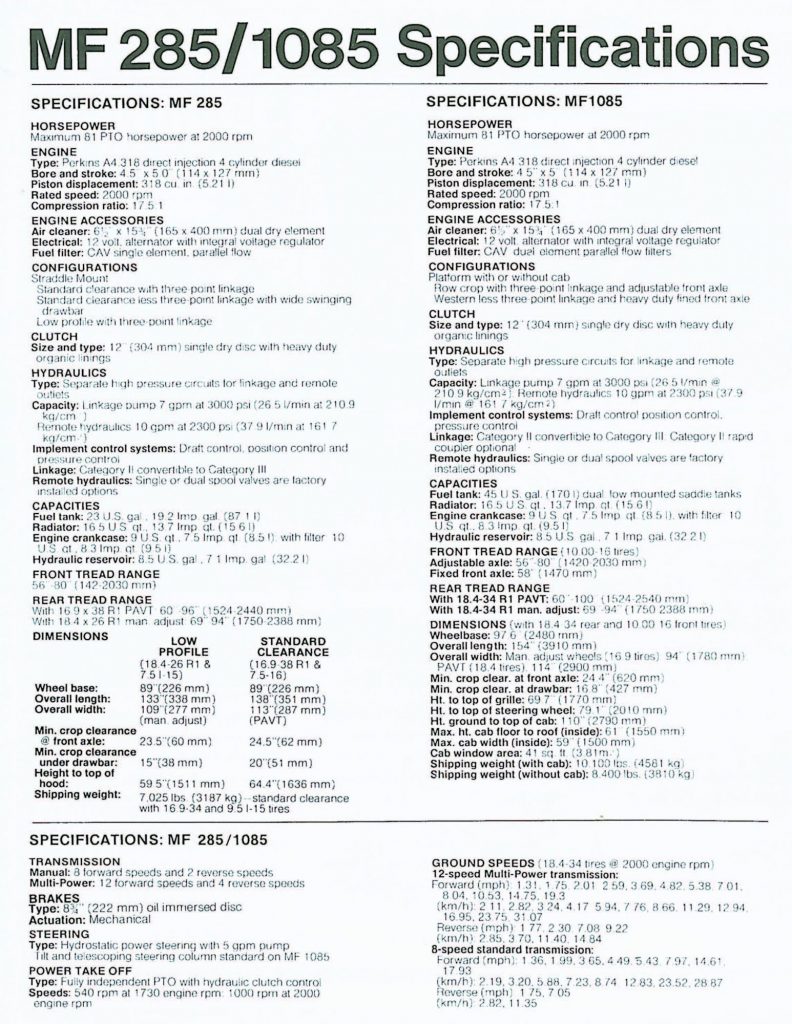 In 1971, when it came time to replace the 1080, which had been in the MF line for four years, the new 1085 was introduced as a platform type tractor. Much of the tractor, including its four cylinder Perkins 81 horsepower engine, remained the same—though styling, ergonomics and the availability of a new quiet, comfortable cab made the tractor more competitive with other brands. The “command post,” as MF called it, was available on either the row crop or “western” (i.e., standard) versions. An interior noise level of 85 decibels was similar or better than most tractors of the time. Rollover protection was built in and the cab tilted for easier servicing.

But if you had come to be an MF man via the Ferguson route, you might have wanted a “straddle” type tractor with the same features. In that case, starting in 1974, you could order a 285. The 285 featured the same 318 cubic inch engine and choice of either an eight speed standard transmission or six speed transmission with the MF multi power high/low shift on the go system, as well as most other mechanical features.

However, the 285 was not offered with a cab. An operator’s only choice for protection was a ROPS with canopy. The 285’s 89 inch wheel base, some nine inches shorter than the 1085’s, made it more maneuverable around yards or in small fields. Its shipping weight was also 1,400 pounds lighter.

So whether you wanted to straddle or sit above your Massey Ferguson’s transmission, the choice was up to you through the 285 or 1085. Though maybe overlooked today, a 1085 with a cab would have been very competitive feature for feature with other tractors of the day in a similar horsepower range.