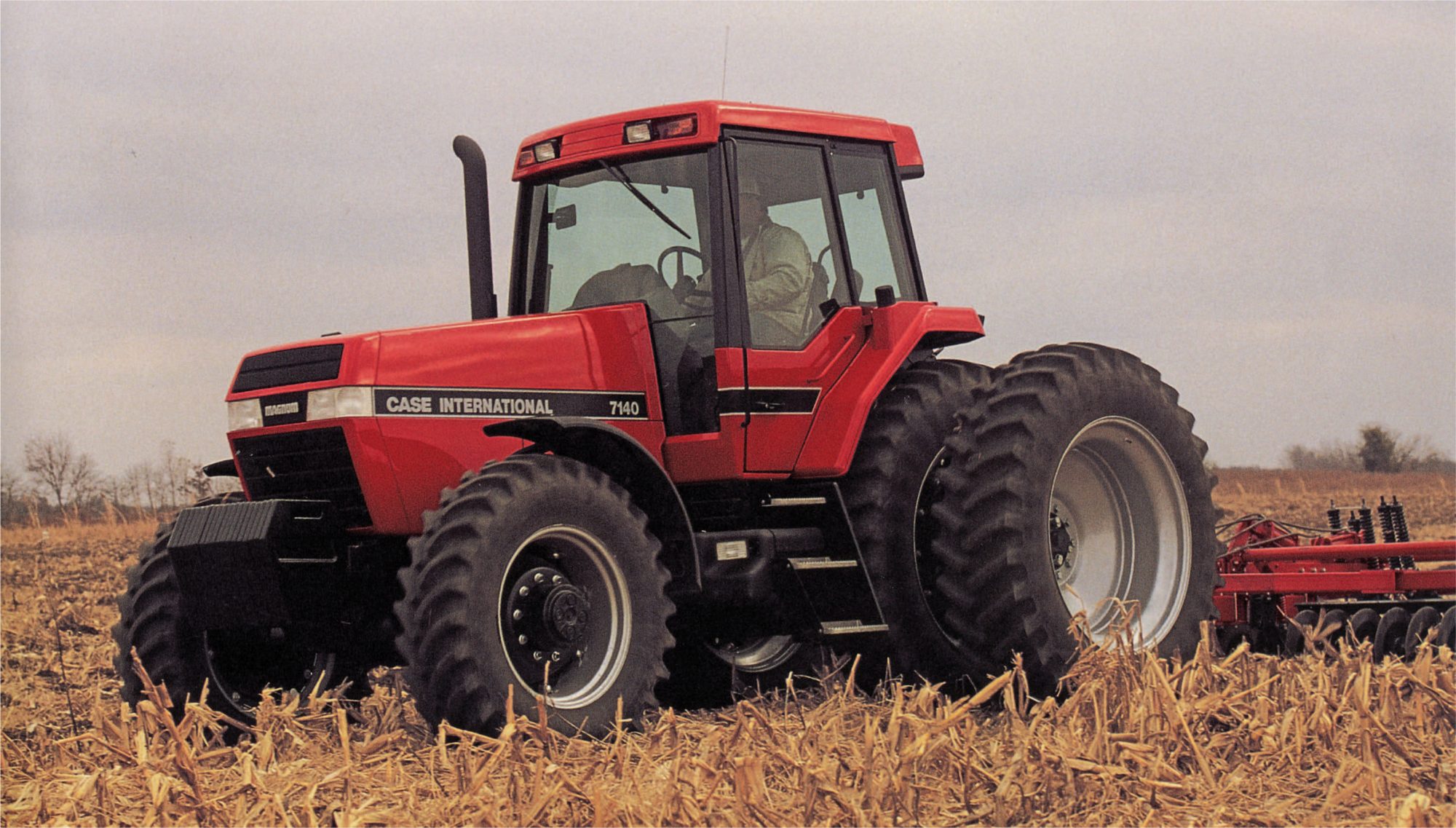 After the purchase of the IH Ag Division by Tenneco, it was merged with Case in hopes that a new company could be formed to survive the turbulent 1980s’ farm economy AND give Tenneco a company with some value that it could sell off.

To do this took time and for the newly formed CaseIH, time was critical. This new company needed a new tractor line if it were to not only survive but to gain market share.

When Case and IH were combined, it was decided to keep the under 100 horsepower IH tractor line and the over 100 horsepower Case tractor line. IH had a new full power shift tractor in development that was nearly ready for production at the time of the merger. IH’s prototypes were already being field tested with production slated to begin within a year or so at the time of the merger.

The new IH tractor was quickly “re-tuned” with parts from both the IH line and Case line to make a better product. The Farmall Works in Rock Island, Illinois (where IH tractors were built) was NOT part of the merger, but the machines and tooling to make the new IH power shift were part of the deal.

For the short term, it was decided to keep building the 94 series Case tractors, but paint them in the new red color of the company. At the same time, the machinery and tooling at Rock Island were moved to Racine and other factories to start production of the all new tractor from CaseIH. If this new tractor failed to keep/regain market share, Case IH would be done—finished. This was a big gamble, but the cards were stacked in favor of CaseIH. This new tractor not only awakened the market, but proved to be the success story the company needed to survive. This tractor was the Magnum.

The Magnum tractor series was revealed to dealers at a meeting in Denver, Colorado in 1987. Here the tractor that would make or break CaseIH was finally shown. It was an instant success and it brought a number of customers back to the CaseIH brand that had left when the merger was announced.

The new Magnum combined features from the Case and IH tractor line to make an all new tractor that was innovative. The front hood, weights, CDC engine, exhaust, dash and rear wheels were from Case. The transmission, cab, frame, front and rear axles, PTO and hydraulics were IH based. Together, these parts were mixed to form an all new tractor that quickly gained a reputation for reliability and durability.

Under the forward tilting hood of the Magnum was a 505 cubic inch (8.3 liter) displacement, six cylinder diesel engine that was turbocharged and gave excellent fuel efficiency. The largest model in the Magnum family (7140) was also intercooled. This engine was produced by a joint venture between Case and Cummins Engines called the CDC (Consolidated Diesel Corporation). The CDC brand engine was used in all of the 7100 series Magnum tractors, Cotton Express cotton pickers and most Axial Flow combines. Smaller sized CDC engines were used in the Maxxum tractor series and Case Uni-Loader skid steers.

The CDC engine was fuel efficient with longer service intervals possible to save money. The wet sleeve design was unique in that it had a mid stop liner. Here the sleeve was supported midway in the bore by the block. This design helped eliminate sleeve deflection, which could cause sleeve cavitation. The engines were all direct start with electric shutoff and all were turbocharged too. The two largest models in the series were also intercooled.

Bolted right behind the engine was the familiar Magnum 18-speed full power shift gear box. The same transmission (generically) was in the 7110 through 7140. The mid mounted master wet clutch provided the most rugged and reliable transmission in the market. The master clutch automatically modulated to protect range or speed transmission clutches from overload.

Other brands used individual gear pack clutches that tried to emulate the master clutch. These designs did not offer the clutch capacity or built-in protection like the Magnum master wet clutch did. It is not uncommon to find Magnum tractors today with tens of thousands of hours of operation on the meter and the transmission had never been touched.

The 18 speeds in the Magnum transmission were evenly spaced with no skips or overlap for smooth, continuous power. The inline shifting pattern was easy to use and you could start in any gear, shift up or down, even to reverse—all without clutching!

Nearly every farm had a use for a tractor with an IPTO and the Magnum offered two choices. The 7110 and 7120 could have a dual shaft, dual speed (540-1000 RPM) IPTO attachment. The 7130 and 7140 offered a single shaft, single speed 1000 RPM only IPTO. The IPTI was hydraulically controlled by a valve. The IPTO was a multi-disc wet clutch design that had its own hydraulic pump to engage and disengage it. If servicing of the unit was needed, the IPTO unit could be removed from the outside of the tractor without splitting the tractor.

The cab on the 7100 series Magnums was a modified IH design. The one-door cab was planned and built already for IH’s next series of tractors at the time the Tenneco merger was announced. The outward styling was slightly changed and the dash was replaced by a modified unit that was similar to the Case 94 series. The cab offered the best visibility of any tractor on the market with over 47 square feet of glass. The front window reached from floor to ceiling. The large right hand side window did not have a mid mounted cab post to block the view. A clear view of the hitch made implement hook-up easy. The deluxe cab interior package was standard. A four-post ROPS cab with canopy roof was also an option. 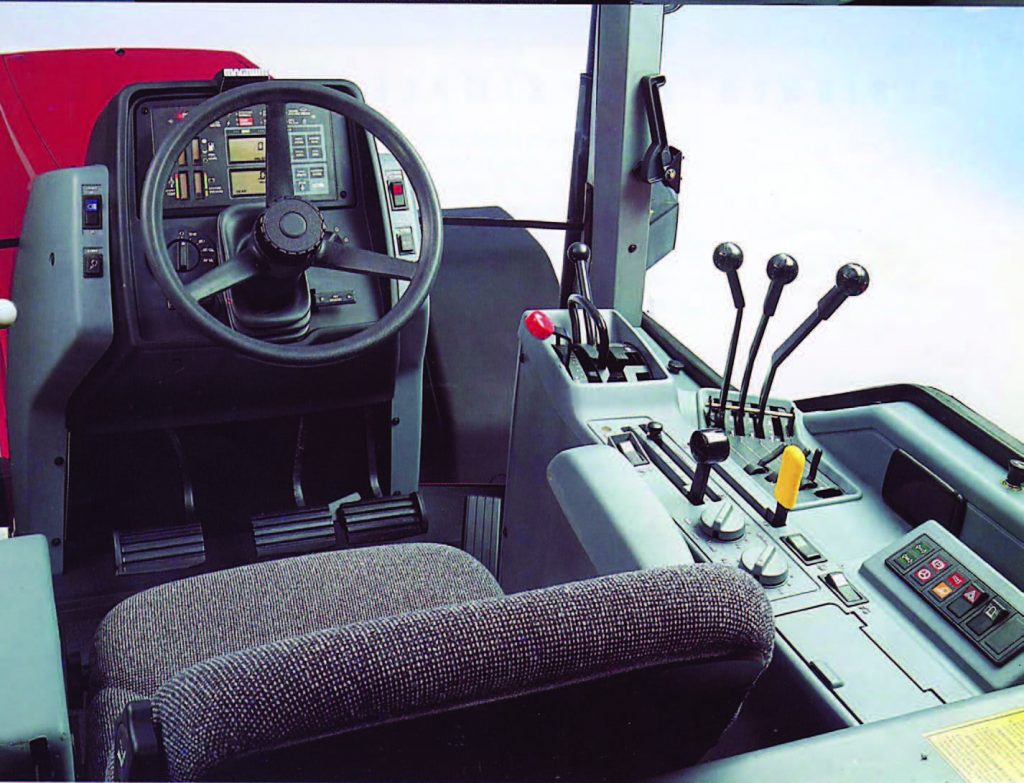 The grille housing, hood, side panels and cab fenders were all made of fiberglass/resin material that could not rust. The light(er) weight of this was needed to have an opening hood that you could open and close from the ground. Dual gas assist springs helped open and close the hood.

One area that farmers requested in a new tractor was more hydraulics— specifically, more three-point hitch lifting capacity. The 7110 had a lifting capacity of 7,700 pounds, while the 7120 lifted 8,300 pounds, the 7130 lifted 9,300 pounds and the 7140 lifted 10,200 pounds. The 7140 was the first two-wheel drive tractor in the industry to lift over 10,000 pounds at the three-point hitch. To accomplish these high lift ratings, the Magnum had both an internal lifting piston and one or two external lifting assist cylinders. This extra lift power was needed for farmers with heavy minimum till, ridge-till and no-till mounted implements.

Two remotes hydraulic valves were standard equipment on the Magnum tractors. Up to two more remote valves (for a total of four valves) could be added. In-cab remote valve hydraulic flow control was standard, too. Competitive makes had the flow control at the outlets, outside of the cab. These were not user friendly to access. 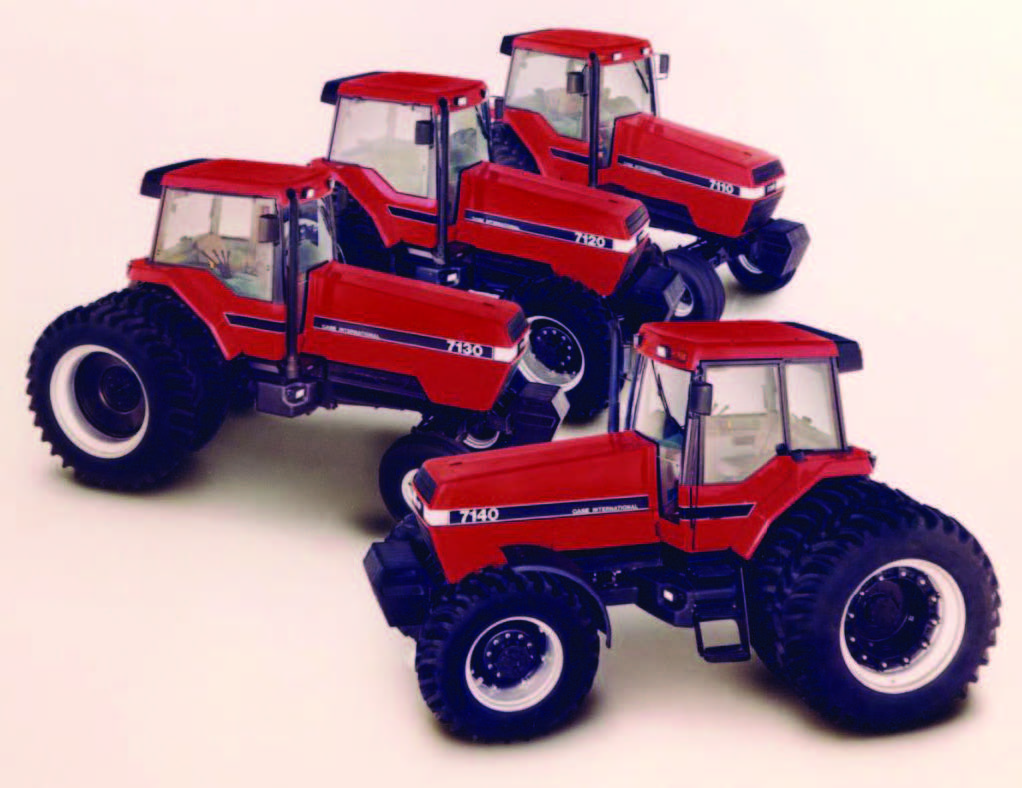 A no pressure, motor return oil coupler was also available. This was needed when using an implement with hydraulic powered motors (auger, blower fan, etcetera) where a no pressure restriction oil return was needed. If the oil were returned to the tractor back through the remote valve, it would heat up from the restriction. To keep the oil from heating up, this returned the oil back to the transmission housing directly, bypassing the valve and keeping the oil cool.

The Magnum tractor was well accepted by farmers. The sluggish ag economy of 1987 led to the drought of 1988, but sales continued to grow. A competitor to CaseIH (who painted their tractors green with yellow wheels) had some employees who farmed “buy” a couple early made Magnum tractors. The tractors were evaluated by the engineering department and field tested. A minimal amount of hours were put on them. Instead of just selling these tractors, they used them for a clever marketing campaign that was quickly exposed.

In an attempt to stop/slow the sale of the Magnum to the painted green with yellow wheel tractor customer, these company-owned Magnum tractors were placed with key dealers and advertised for sale, citing the low hours on them. This was meant to infer that the previous owner was unhappy with the Magnum and had traded it in on a painted green with yellow wheel tractor. Nothing could be further from the truth! After appearing in one dealer’s ad for a couple weeks, it was “sold” but it reappeared in a different dealer’s advertisement a couple weeks later. This Magnum “made the rounds” in the state of Illinois. After the second or third listing of the SAME tractor (but at different dealerships), the gig was up and shell game exposed.

These 30-plus year tractors today won’t command their full list price, but many are still holding at three-quarters or two-thirds of their original price in value. The Magnum had proven to be a simple reliable tractor that was mostly free of electronics and had NO added emissions equipment.

When researching for this article, this author found a few Magnum tractors with very high hours on them that are still serving their owners every day. A couple Magnum tractors found in Europe had well over 40K hours and one here in the USA has more than 80K hours on it.

With simple maintenance, the Magnum had proven to be nearly bullet proof. Shortly after the Magnum came out, a few dealers complained that the Magnum tractor was TOO dependable. They would sell some filters, oil and maybe a belt or some minor part to keep them running and that was it. A number of the dealers never had to open up the transmission for service either! This would be great if you owned one, just not so great if you tried to make a living repairing them!

A few of the options that could be fitted on the 7100 Magnum tractors included a tool box for $60, wide MFD front fenders ($685) and MFD drive line shield ($120). The third and fourth remote hydraulic valves were $620 each and creeper drive transmission cost $1500.

The 7100 Magnums were sold in Europe, too. The 7130 and 7140 were the two models offered for sale there. Both were FWA models. A two-wheel drive model was not offered in Europe. The European Magnum had a few slightly different features including trailer brake setup, foot throttle, lower grille headlights and wider rear fenders. Dual real wheels were not typically found on European tractors due to travel width restrictions.

Today, finding a high houred Magnum and then refurbishing it or rebuilding it can be profitable. There is a market demand for mechanically controlled (non-computer/non def emissions) tractors yet. Investing in one can be a good financial decision as it is a machine you can fix without a computer.